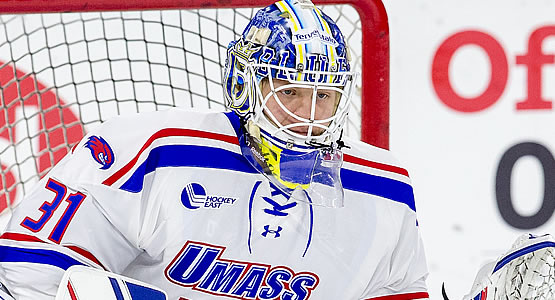 AROUND HOCKEY EAST: The Boston College Eagles improved to 8-1-0 in Hockey East play with their sixth and seventh straight victories against conference opponents, toppling a pair of ranked foes in #11 New Hampshire and #12 Northeastern last weekend. Joseph Woll (St. Louis, Mo.) stopped 50 shots against the two highest-scoring offenses in Hockey East to help extend BC's winning streak to seven games. Junior captain Michael Kim (Toronto, Ont.) had two goals, including the winning strike, in a 3-2 win over the Wildcats ... UMass Lowell swept the UConn Huskies, extending its conference winning streak to four games. Ryan Dmowski (Easy Lyme, Conn.) notched three points on two goals and an assist in Friday night's 5-2 win over the Huskies. Christoffer Hernberg (Espoo, Finland) stopped 56 of 58 shots to pick up two wins. The weekend included his second-career shutout on Saturday, while the junior netminder has now won each of his last five starts, all in league play, and is 8-1-0 on the season for the River Hawks ... Northeastern split the weekend in league play to remain tied for second in the conference standings. Prior to the 4-1 setback at the hands of the Eagles, the Huskies took a 2-1 victory over Vermont thanks in part to the decisive strike off the stick of Jeremy Davies (Sainte-Anne-de-Bellevue, Que.). The sophomore blueliner then assisted on the Huskies' only goal the next night against Boston College ... Providence skated to a 1-0-1 weekend in a home-and-home with Merrimack. Josh Wilkins (Raleigh, N.C.) had four points (2g, 2a) in the series, including both of the Friars' goals in a 2-1 win on Friday before setting up a pair of markers on Saturday in a wild 6-6 draw. The Warriors duo of Jace Hennig (Port Moody, B.C./1g, 4a) and Ludvig Larsson (Malmo, Sweden/3g, 2a) tied for first nationally with five points over the weekend. Both skaters had a career-best four points in Friday night's 6-6 stalemate ... Maine and Boston University split a pair of offensive outbursts over the weekend. Friday night in Orono, the Black Bears earned a 5-2 win over the Terriers backed by a career-high 40 saves from rookie goaltender Jeremy Swayman (Anchorage, Alaska) and the first career goal from Cannon Pieper (Roseville, Minn.). The next night, Jake Oettinger (Lakeville, Minn.) pitched a 30-save shutout in a 7-0 victory for Boston University. In the series, Logan Cockerill (Brighton, Mich.) posted his first four collegiate points on a goal and an assist in each game against Maine, ending the weekend with a plus-three rating. 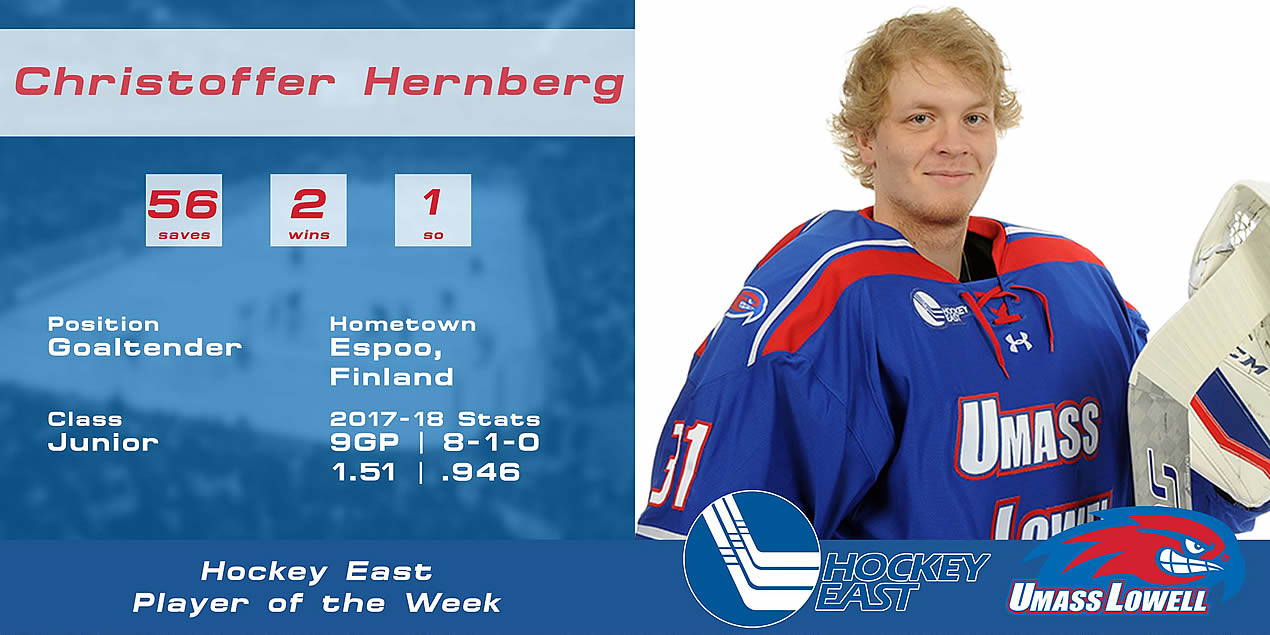 Christoffer Hernberg (Espoo, Finland) stopped 56 of 58 shots (.966 sv%, 1.00 GAA) in two wins against UConn, including his second-career shutout on Saturday. Hernberg has now won his last five starts, all in league play, and is 8-1-0 on the season for the River Hawks.

Jeremy Swayman (Anchorage, Alaska) earned his third win of the season for the Black Bears on Friday night with a 40-save performance against Boston University. The rookie netminder's career-high 40 stops against the #18 Terriers offense that averages 33.36 shots on net per game. 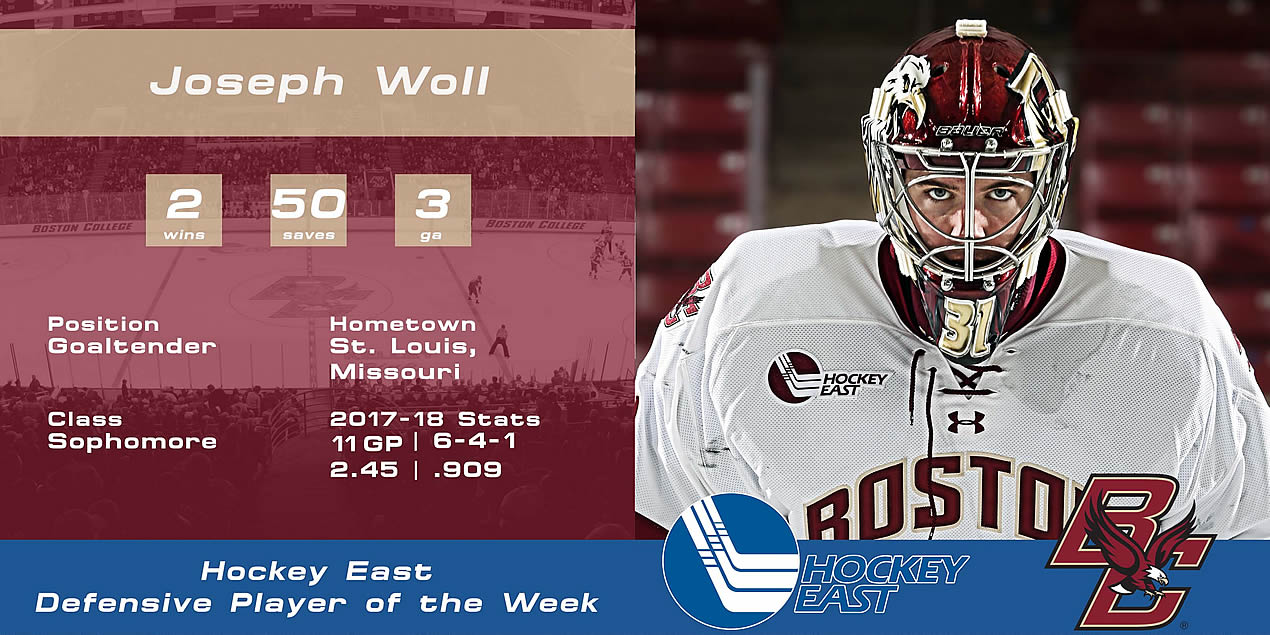 Joseph Woll (St. Louis, Mo.) stopped 50 shots, allowing just three goals, in two games against a pair of ranked opponents who own the top two scoring offenses in Hockey East. Woll picked up two wins against #11 New Hampshire and #12 Northeastern to help secure the Eagles' spot atop the league standings against the then-second and third place sides and extended BC's winning streak to seven games.

Michael Kim, BC (Jr., D; Toronto, Ont.) Scored twice against New Hampshire, including the game-winning goal, in a 3-2 win Friday and set up the decisive tally in a 4-1 win over Northeastern the next night.

Logan Cockerill, BU (Fr., F; Brighton, Mich.) Posted his first four collegiate points on a goal and an assist in each game against Maine, ending the weekend with a plus-three rating.

Jake Oettinger, BU (So., G; Lakeville, Minn.) Recorded a 30-save shutout in BU's 7-0 victory against Maine on Saturday.

Patrick Holway, Maine (So., D; Cohasset, Mass.) Recorded one goal on Friday night to contribute to the Black Bear's 5-2 win against the Terriers. Holway finished the weekend with 9 shots on goal and three blocks.

Jace Hennig, MC (Sr., F; Port Moody, B.C.) Tied for first nationally with five points over the weekend based on a goal and four helpers. A career-best four of those points came in Saturday's 6-6 tie with Providence after he scored and dished three helpers.

Ludvig Larsson, MC (Jr., F; Malmo, Sweden) Ranked first nationally with five points (3g, 2a) over the weekend. He had a career-best fourpoint outing in Saturday's 6-6 tie against Providence (2g, 2a).

Jared Kolquist, MC (Sr., D; Hermantown, Minn.) Was the nation's top-scoring defenseman on the weekend after finishing with four points (1g, 3a), which tied a career-high. All four of them came in Saturday's 6-6 tie with Providence, and he also finished with five shots on goal.

Jeremy Davies, NU (So., D; Sainte-Anne-de-Bellevue, Que.) Scored the game-winning goal in Friday's 2-1 win over Vermont and assisted on the Huskies' only goal the next night against Boston College.

Josh Wilkins, PC (So., F; Raleigh, N.C.) Had four points (2g, 2a) in two games against MC, including both of the Friars' goals in a 2-1 win on Friday before setting up a pair of markers on Saturday.