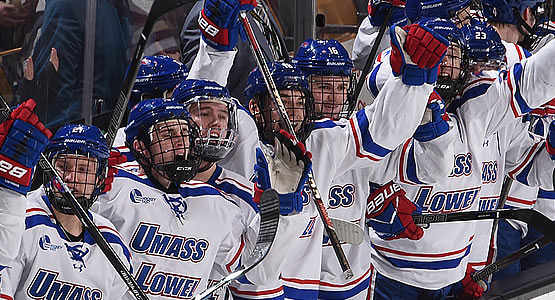 - This is the first time in program history that Northeastern and Sacred Heart will meet. NU is 48-29-8 all-time in season openers and 48-32-5 all-time in home openers at Matthews Arena.

- Northeastern's returns two of the most prolific point-getters in the NCAA, including assistant captain Dylan Sikura (Aurora, Ont.) and Adam Gaudette (Braintree, Mass.). Sikura's 92 career points are tied for fourth most amongst all active players in the country, while Gaudette leads all active skaters in power-play goals with 21 in his two seasons at Northeastern.

- Boston College kicks off its 2017-18 campaign hosting Quinnipiac. The Bobcats have defeated the Eagles in each of the last two seasons, including in the 2016 Frozen Four in Tampa, Florida.

- Vermont returns sophomore goaltender Stefanos Lekkas (Elburn, Ill.), who last year posted a .911 save percentage and 2.56 goals against average in league play. His 535 saves were third-most among all Hockey East netminders.

- Merrimack enters the 2017-18 season coming off an overall record of 15-16-6 from last year. Head coach Mark Dennehy was also part of the coaching staff of a U.S. Under-17 Select Team that captured a gold medal at the Five Nations Tournament in Ostrava, Czech Republic last summer.

- The Warriors return five of their top six point-getters from 2016-17, including Brett Seney (London, Ont.) and his 31 points.

- This is the third consecutive season that Providence and Miami will kick off their regular season against each other and the seventh straight year the Friars and the Red Hawks will play. In the last seven meetings of the two teams, the Friars carry a 4-1-2 record.

- Providence has racked up four consecutive seasons with at least 20 wins, including the 2014-15 season when they claimed the NCAA championship at TD Garden in Boston.

- Massachusetts was victorious in exhibition match up against Queens last weekend, taking a final score of 1-0 at the Mullins Center. The lone goal of the game came off the stick of Niko Rufo (Stoneham, Mass.). Rufo spent the last four seasons with the Providence Friars, appearing in 55 games.