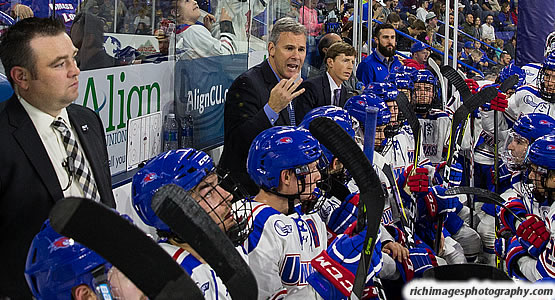 - This weekend's contest is the first conference matchup for Northeastern this season. Leading the nation, Dylan Sikura (Aurora, Ont.) has tallied 12 points (6g, 6a) in his first five games. Sikura and junior forward Adam Gaudette (Braintree, Mass.) have recorded four straight multi-point games this season, making the Huskies the first team since the 2012-13 season to do so at the start of a season.

- UMass Lowell is fresh off of two wins against Clarkson and St. Lawrence from last weekend, improving its record to 3-3-0. Junior goalie Christoffer Hernberg (Espoo, Finland) was named the Hockey East Defensive Player of the Week after his weekend performance, stopping 58 of 59 shots, recording a .983 save percentage. Hernberg recorded his first career shutout in a 5-0 victory over St. Lawrence.

- Providence and Boston College will face off for the second time this season on Friday. In the last meeting, the Eagles won, 4-3, in overtime after originally trailing 3-0. The Friars then host the Terriers in the first of three contests between the two this season. Providence tied Boston University in the last meeting of the 2016-17 season, 2-2.

- Kasper BjÃ¶rkqvist (Espoo, Finland) recorded a hat trick in the first period of last weekend's victory over St. Lawrence. His hat trick marked the first Friars' hat trick to take place in the same period since 2002, when Devin Rask recorded four goals in the third period against Princeton.

- BC returns home to face the top-ranked and defending champion Denver Pioneers after a two-game series in St. Cloud last weekend.

- Logan Hutsko (Tampa, Fla.) and Christopher Brown (Bloomfield Hills, Mich.) scored their first goals of the season in game one against St. Cloud, an eventual 5-2 setback.

- Maine and UMD have met on 10 previous occasions, the coming last in 2012 when the Black Bears prevailed, 1-0. Maine is 4-6-0 against Minnesota Duluth all-time.

- The Black Bears are 2-2-0 overall after splitting a home series against Miami last weekend. In game two, Maine racked up half a dozen goals against the RedHawks, a team-high last recorded in 2010. In the 6-3 victory, six different Black Bears found the back of the net while 10 earned at least one point. Jeremy Swayman (Anchorage, AK) made his second career appearance and earned his first career win with 27 saves.

- The Huskies and the RedHawks are set to meet for the first time this weekend. UConn is 1-1-0 all time in contests against teams in the NCHC.

- Senior goaltender Danny Tirone (Trumbull, Conn.) stopped a season high 45 shots on goal in Friday night's victory to help the Wildcats get off to their best start since the 1993-94 season.

- Vermont returns home after a series on the road at Michigan last weekend. In Friday night's matchup, goaltender Stefanos Lekkas (Elburn, Ill.) made a career-high 41 saves. In game two against the Wolverines, Drew Best (Plymouth, Mich.) made his mark scoring his first career goal. UVM is 2-4-0 headed into the contest against UNH.