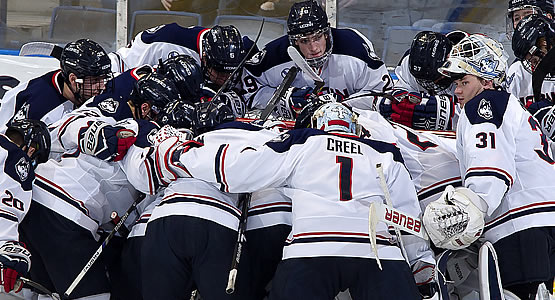 - UConn sophomore Alexander Payusov (Montreal, Que.) leads the Huskies this season with four goals and one assist, including a hat-trick that paced UConn to a 6-4 comeback win against AIC last weekend.

- The series marks the first conference contest for the Terriers this season. BU fell to Minnesota State twice last weekend during a two-game series that saw freshman Shane Bowers (Halifax, N.S.) net two goals, bringing his total to four on the year.

- Through three games, Providence junior Ryan Tait (Santa Clarita, Calif./1g, 2a) and freshman Jason O'Neill (Odenton, Md./3a) lead the Friars' offense in scoring. After recording two assists in conference matchup against BC last Sunday, O'Neill leads the team with a plus-4 rating. He is followed by Tommy Davis (Ho-Ho-Kus, N.J./plus-3) and Jacob Bryson (London, Ont./plus-3).

- The Huskies (3-0-1) return home for a two-game series against Quinnipiac. A victory this weekend would give Northeastern head coach Jim Madigan his 100th career win.

- The Minutemen are off to a 3-1-0 entering this weekend's series with Ohio State. UMass has met Ohio State once before at the Florida College Classic in 2002 where the teams skated to a 2-2 draw.

- After a five-point week (2g, 3a), freshman forward John Leonard (Amherst, Mass.) was named Pro Ambitions Rookie of the Week on Monday. Leonard's performance extended his point streak to four games and he currently sits tied for the national rookie lead with seven points on the year (3g, 4a).

- Vermont is at an even 2-2-0 heading into a two-game series at Michigan. Last season UVM defeated Michigan, 3-0, at home during a regular-season matchup that featured Stefanos Lekkas' (Elburn, Ill.) first career shutout.

- Last time out, Rochester, New York native Max Kaufman scored his first career goal to give the Catamounts a 3-2 win over Union. The win also marked the fourth consecutive game in which the Catamounts have scored the game's opening tally.

- For just the second time in program history, the Eagles fly west for a two-game set at St. Cloud. Boston College enters the series with an overall record of 1-1-1, fresh off its first win of the year against conference opponent, Providence.

- Casey Fitzgerald (North Reading, Mass.) scored a pair of goals in come-from-behind 4-3 win, including the game-winner in overtime, to record his second career two-goal game and earn Hockey East Defensive Player of the Week accolades.

- Christopher Grando (Islip, N.Y.) and Graham McPhee (Bethesda, Md.) also contributed a goal apiece, making them the only two Eagles to score in back-to-back contests in the early part of 2017-18.

- This weekend is just the second all-time meeting between Merrimack and Minnesota Duluth. The Warriors defeated the Bulldogs in the only prior contest, a 4-2 win at the 2000 Silverado Shootout on Dec. 28, 2000.

- While Merrimack has scored just four times in three games so far, nine different Warrior skaters have recorded at least a point and four different players have found the back of the net.