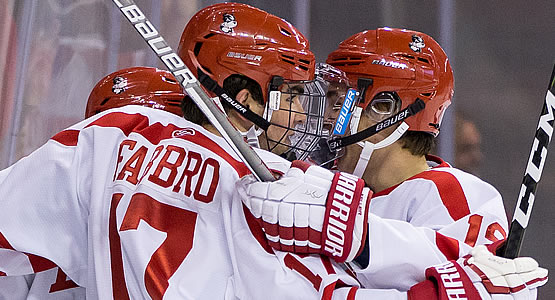 - Boston University, restocked with seven 2017 NHL Entry draft selections and picked by the league head coaches to capture the regular season title, welcomes Union to Agganis Arena to begin the 2017-18 season on Saturday night. It marks the first time in 96 seasons that BU has played a game in September. The Terries will also plan an exhibition contest Sunday evening.

- The Eagles begin the defense of their 2017-18 regular season title Saturday in an exhibition contest at Warrior Arena in Brighton, Massachusetts.

- Boston College finished last season with a 21-15-4 overall record, the eighth consecutive year in which the Eagles have eclipsed the 20-win barrier. It is the third-longest such streak in NCAA hockey to only Denver (16) and North Dakota (14).

- The River Hawks, having won their second regular season and third tournament title in 2017-18, were picked to finish second in the regular season by the Hockey East head coaches. In their fifth straight trip to the Hockey East Tournament championship game, UMass Lowell downed Boston College, 4-3, to claim the Lamoriello Trophy.

- Northeastern, coming off an 18-15-5 season that marked the fourth-straight year the Huskies achieved a .500 record or better, return two of the nation's top-10 scorers from a year ago in Dylan Sikura (Aurora, Ont./21-36-57) and Adam Gaudette (Braintree, Mass./26-26-52). Gaudette also lead the NCAA and set a school record with 16 power-play goals.

- Massachusetts welcomes in one of the most highly anticipated freshman classes in program history, boasting the two highest NHL draft picks to ever pull on a Minuteman sweater. Defenseman Cale Makar (Calgary, Alta.) was selected fourth overall to the Colorado Avalanche in 2017, while classmate and fellow blueliner Mario Ferraro (King City, Ont.) was taken in the second round, 49th overall, by the San Jose Sharks.

- The Black Bears enter the 2017-18 season coming off an overall record of 11-21-4 from 2016-17. Maine was ranked tied with Massachusetts for a 10th place finish in the Hockey East Coaches' Preseason Poll.

- Maine last faced Acadia in an exhibition game prior to the 2010-11 preseason, a 5-1 Black Bears victory at Alfond Arena.

- New Hampshire enters this season coming off an overall record of 15-20-5 from last year.

- Two freshmen making their debut for the Wildcats this season, Max Gildon (Plano, Texas) and Benton Maass (Elk River, Minn.), were selected in the 2017 NHL Entry Draft. Gildon was taken by the Florida Panthers 66th overall in the third round while Maass went in the sixth round with the 182nd pick to the Washington Capitals.

- Senior forward Rob Darrar (Monroe Township, N.J.) was named captain of the Catamounts for the 2017-18 season, coming off a year in which he recorded a career-high 13 points (6g, 7a) despite skating in just 20 games due to injury. Vermont also returns two of its top three point-getters from a season ago in sophomore Ross Colton (Robbinsville, N.J.) and junior Brian Bowen (Littleton, Mass.), who each racked up 27 points on 12 goals and 15 assists in 33 games played.

- The Catamounts were picked to finish sixth in the Hockey East Coaches' Preseason Poll, the highest projected finish for Vermont in six years. In 2016-17, Vermont wrapped the regular season in sixth place, the best regular season finish for the team since 2009.

- Twelve new players will make their debut for Vermont this season which include six forwards, four defensemen, and two goaltenders.