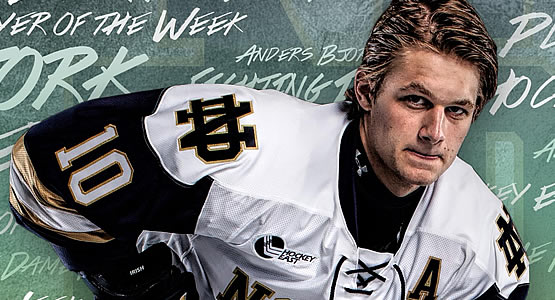 Player of the Week Anders Bjork of Notre Dame

AROUND HOCKEY EAST: The Notre Dame Fighting Irish advanced to the 2017 Frozen Four over the weekend, marking the third time in program history the team has moved on to the final weekend of the college hockey season (2008, 2011). Notre Dame will play the number one overall seed Denver at 9:30 p.m. on April 6 at the United Center for a chance to play for the NCAA title game on April 9 at 8 p.m. ... The Irish become just the fourth host to play in the Frozen Four and first since 2006, when Wisconsin won the NCAA title in Milwaukee. Minnesota hosted in 2002 in St. Paul and Boston University hosted in 1972; Both teams also claimed the NCAA trophy in that year ... Notre Dame advanced through the Northeast region, topping number one seed Minnesota, 3-2, in the semifinal before squaring off with UMass Lowell in a rematch of the 2017 Hockey East semifinal, a 5-1 River Hawk win. UMass Lowell got a 19-save shutout in the regional semifinals from rookie netminder Tyler Wall (Leamington, Ont.) to move past Cornell, 5-0, but were downed in the final by two goals from Irish rookie Cam Morrison (Aurora, Ont.) and three assists from Anders Bjork (Mequon, Wis.). Bjork had five points in the two games as he scored two goals in Saturday's semifinal, including the game winner, and set up all three tallies on Sunday. The junior forward has now factored in on 13 of Notre Dame's 21 game-winning goals ... Boston University advanced to the West Regional final, claiming a 3-2 double-overtime victory against defending NCAA champion North Dakota in Fargo, North Dakota thanks to Charlie McAvoy's (Long Beach, N.Y.) fifth tally of the year. Freshman goaltender Jake Oettinger (Lakeville, Minn.) stopped 56 shots in the contest, the most by any Hockey East netminder this season. The Terriers were tripped up by Minnesota Duluth in the final, 3-2, in another overtime tilt, denying Boston University its 23rd Frozen Four appearance ... Providence skated close to home at the Dunkin' Donuts Center in Providence in the East Regional, but was stopped short by eventual regional champion Harvard, 3-0. 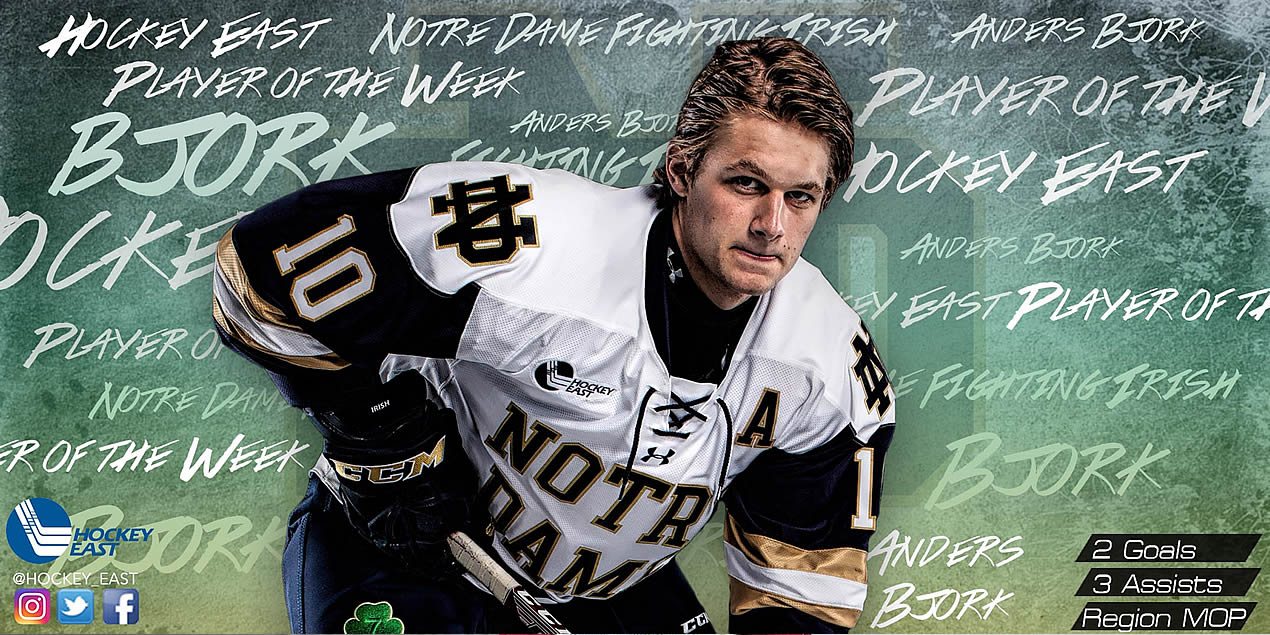 Anders Bjork (Mequon, Wis.), a Hobey Baker and Hockey Humanitarian finalist, was named Most Outstanding Player of the Northeast Regional after he lifted his team to its third Frozen Four with two goals and three assists. Bjork scored twice, including the game-winning goal, in Saturday's 3-2 semifinal win and set up all three tallies in Sunday's 3-2 overtime victory against UMass Lowell. 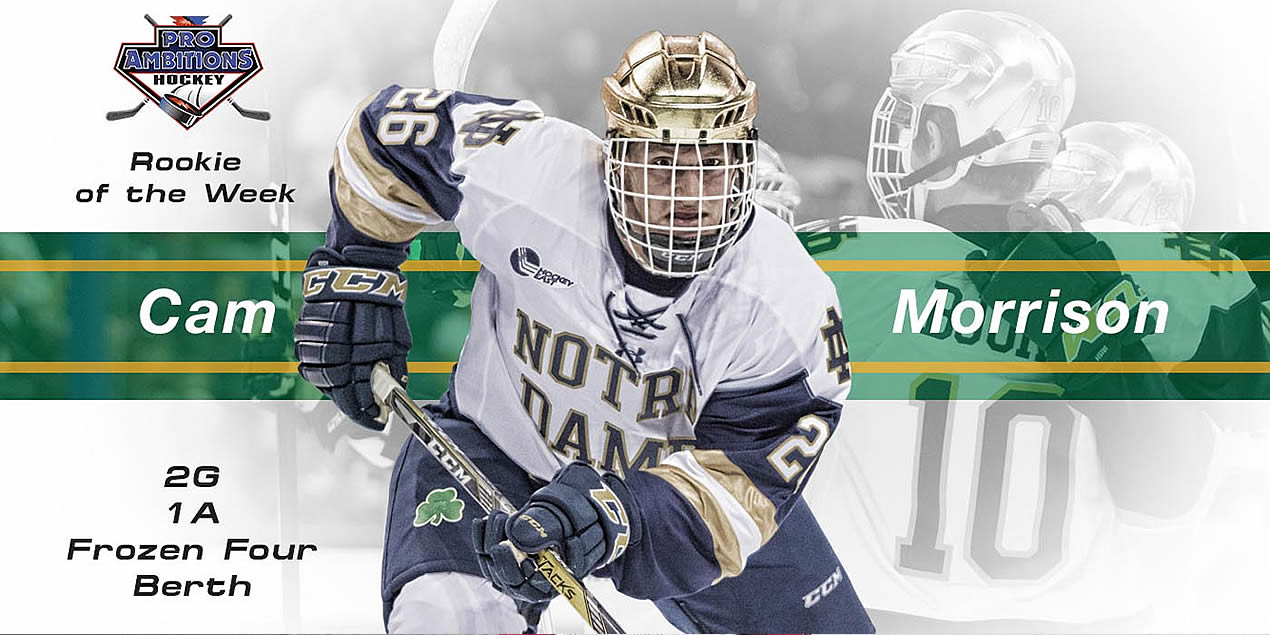 Cam Morrison (Aurora, Ont.) had three points, including two goals in Sunday's regional final against UMass Lowell to help the Irish into the Frozen Four. Morrison potted his second marker with just 5:17 remaining in the game to force overtime. He also set up Saturday's game-tying goal in the semifinals against Minnesota. 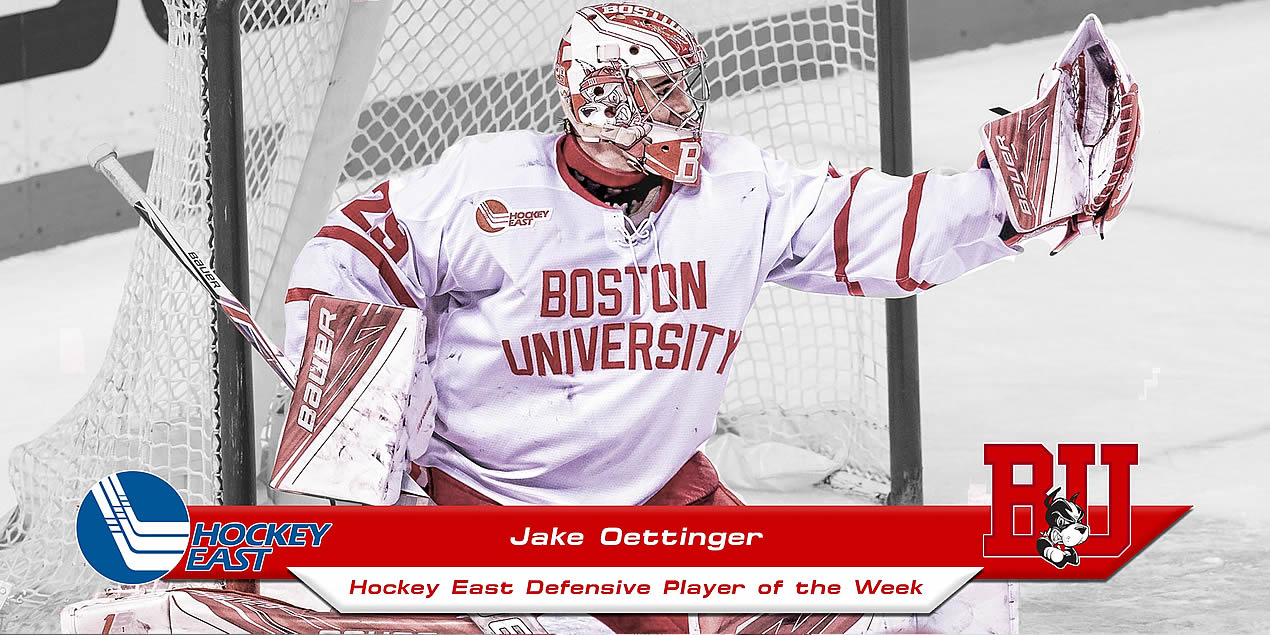 Jake Oettinger (Lakeville, Minn.) backboned his Terrier squad to the West Regional final by stopping 56 shots, the most by any Hockey East netminder this season, in a double-overtime victory against North Dakota in Fargo, North Dakota. The next night, he kicked out 20 pucks in a 3-2 overtime loss in the final, moving his save total to 76 on the weekend.

Charlie McAvoy, BU (So., D; Long Beach, N.Y.) Pushed the Terriers into the West Regional final with his fifth tally of the season in double overtime against North Dakota and set up BU's first tally in the 4-3 win. He was named to the All-Tournament Team for his performance.

Patrick Harper, BU (Fr., F; New Canaan, Conn.) Forced overtime in the West Regional final against Minnesota Duluth after he picked the top corner just 3:13 remaining in the game. He also dished out two assists in the semifinal win over North Dakota, including on the game-winning, double-overtime marker.

Ryan Lohin, UML (Fr., F; Chadds Ford, Pa.) Picked up three points in the Northeast Regional as he scored two goals in UMass Lowell's 5-0 semifinal victory over Cornell and set up a tally in the final against Notre Dame. He was the lone freshman named to the All-Tournament Team.

Michael Kapla, UML (Sr., D; Eau Claire, Wis.) Helped the River Hawks in to the Northeast Regional final by registering an assist in the semifinal win over Cornell. He was named to the All-Tournament Team for his performance across the two games.

Cal Petersen, ND (Jr., G; Waterloo, Iowa) Tabbed as the goaltender on the All-Tournament Team after backing the Irish into the Frozen Four. The Notre Dame captain made 58 saves in the two outings and picked up the primary assist on the opening goal in Notre Dame's 3-2 win over Minnesota, sparking a three-goal comeback after his team fell in a 2-0 hole.

Andrew Oglevie, ND (So., F; Fullerton, Calif.) Scored a goal in each game of the Northeast Regional, including the overtime tally that sent Notre Dame to its third Frozen Four in program history. He was named to the All-Tournament Team after his two-goal weekend.