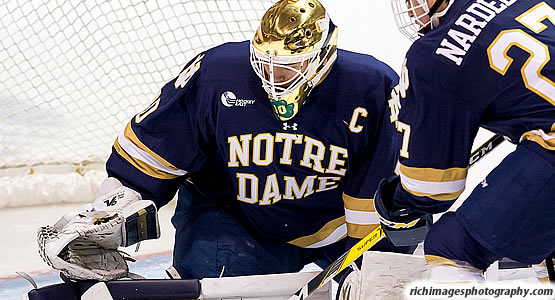 - The Terriers (12-5-3 HEA) and Irish (11-5-4 HEA) enter the final weekend of the regular season sitting in second and third place, respectively, with just one point separating them in the Hockey East standings.

- Boston University has already earned a bye in the opening round of the Hockey East Tournament, and is still alive to capture the number one seed. With 27 points in the standings currently, and Boston College sitting on 29, the Terriers can either clinch the regular season title or share it while still retaining the top seed thanks to the 2-0-0 record against the Eagles in the regular season.

- Defenseman Charlie McAvoy (Long Beach, N.Y.) had four points (1g, 3a) last weekend for the Terriers in their home-and-home series with New Hampshire (1-0-1). The sophomore also had a plus-six rating in the three-point effort.

- Irish junior goaltender Cal Peterson (Waterloo, Iowa) is the reigning Hockey East Defensive Player of the Week after his efforts to end Providence's nine-game winning streak last weekend. The Notre Dame captain turned away 33 attempts to backstop the Irish to a 1-0 win over the Friars on Friday night, snapping their NCAA-leading win streak in the process. The next night, he turned away another 39 shots in route to a tie.

- Boston College (13-4-3 HEA), with two points this weekend against UMass Lowell (12-7-1 HEA), can take home at least a share of the regular season crown for the second straight season. Any more than two points and the Eagles will be the lone victors as they control their own destiny.

- The River Hawks currently sit fourth with 25 points in Hockey East play. They have already secured home ice for the opening round of the tournament, but will look to knock off the Eagles to earn an opening round bye into the quarterfinals.

- Austin Cangelosi (Estero, Fla.) registered three points last the weekend, as the Eagles played host to Vermont for a two-game series. The senior holds the crown as the number one centerman in all of Division I hockey, boasting a .653 faceoff percentage.

- Junior forward C.J. Smith (Des Moines, Iowa) played a role in four of UMass Lowell's five goals in a 5-2 win over UMass on Saturday. He found the back of the net once and dished out three helpers on the night, upping his point total to 17-23--40.

- UMass (2-17-1 HEA) enters the weekend locked into 12th place in the league standings. The Minutemen will take on the number five seed in the first round of Hockey East Tournament play, traveling to either UMass Lowell, Providence, Vermont, or Merrimack.

- Providence (10-7-3 HEA) currently sits in fifth place with 23 points after taking just one point from Notre Dame on the road. With two wins this weekend, the Friars can move as high as third place and would clinch a bye in the opening round of the Hockey East Tournament.

- Steven Iacobellis (Pt. Coquitlam, B.C.) registered his 85th career point at UMass over the weekend as the senior two-time captain potted one goal against UMass Lowell.

- Vermont (9-7-4 HEA) currently sits in sixth place in the Hockey East standings and has already clinched home ice advantage for the opening round. With two wins over Merrimack, and losses from Providence and Lowell, the Catamounts can climb as high as fourth place and earn a bye in the opening round.

- The Warriors (7-7-6 HEA) can finish anywhere from fifth to ninth, and hope to secure home ice in the opening round with at least three points from Vermont.

- Brian Bowen (Littleton, Mass.) led the offense for the Catamounts en route to taking two points from Boston College in two ties over the weekend. The sophomore registered three goals and an assist on the weekend and earned Hockey East Player of the Week honors.

- Merrimack's Sami Tavernier (Morzine, France) earned Pro Ambitions Rookie of the Week accolades for his performance in three games last week. The Warriors went 2-0-1 as the freshman forward had at least a point in each game, posting a 2-2--4 stat line on the week.

- New Hampshire (7-9-4 HEA) and UConn (6-10-4 HEA) find themselves in tight quarters entering their two-game series. The teams sit in ninth and 10th place, respectively, with only two points separating them. Both teams have the opportunity to clinch home ice with a sweep over the other,

- Over the weekend, UNH skated to a 4-4 tie with Boston University on the road, before falling to the Terriers, 8-4, at home. The Huskies dropped a pair of games to Northeastern over the weekend.

- Tyler Kelleher (Longmeadow, Mass.), the NCAA's leading point-getter, continued on his hot streak this weekend by notching a goal and two assists in each of the Wildcats' tilts with the Terriers. The senior forward currently owns a 20-37--57 stat line on the season.

- Sophomore forward Maxim Letunov (Moscow, Russia) scored the lone goal on the weekend for UConn in their home-and-home series with Northeastern.

- Northeastern (8-9-3 HEA) currently sits in eighth place in the league standings after taking four points from UConn over the weekend. The Huskies can finish as high as the six seed with a road sweep of Maine this weekend, giving them home ice in the opening round.

- The Black Bears (4-14-2 HEA) find themselves locked into 11th place in the Hockey East standings as they enter their final homestand of the season.

- Zach Aston-Reese (Staten Island, N.Y.) continues to lead the Huskies in points for the season. The senior forward netted his third hat trick of the year and added an assist in Saturday night's win over UConn. His 56 points (27g, 29a) is good for second place in overall point getters in all of Division I.

- Freshman Chase Pearson (Cornwall, Ont.) had three points on the weekend for Maine in a 0-1-1 road trip at Merrimack. The forward found the back of the net once and dished out two helpers in the series. He also had a plus-three rating on the weekend.