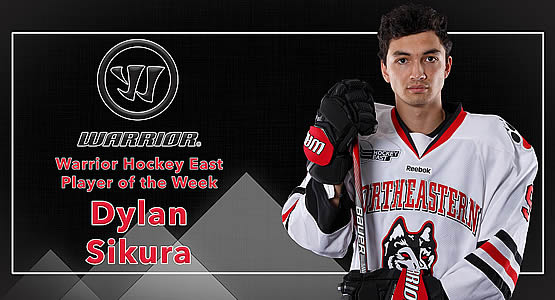 Warrior Hockey Players of the Week Dylan Sikura of Northeastern

AROUND HOCKEY EAST: The Hockey East playoff picture is no clearer as the league calendar flips to February games, as teams sitting in third through ninth place are separated by just six points with the bulk of the conference schedule remaining. In the final season with 12 teams, each program will earn a playoff berth with the top four seeds receiving byes into the quarterfinals. The first two rounds will each be best-of-three series hosted by the higher seeds before the 33rd annual championship weekend takes place, March 17-18, at TD Garden ... Last week, Merrimack toppled then-No. 1 Boston University in each of two contests, thanks in large part to the play of goaltender Collin Delia (Rancho Cucamonga, Calif.) Delia stopped 67 of 69 shots to hold the Terriers offense to just two goals, helping his team to four points in league play ... No. 11 Boston College extended its lead in the conference standings with wins over UConn and Notre Dame. Pro Ambitions Rookie of the Week Joe Woll (Dardenne Prairie, Mo.) stopped a career-high 42 shots on Tuesday to backstop his team to a 2-1 victory before turning aside another 29 shots Saturday in a 6-4 win over the Irish. Eagles captain Chris Calnan (Norwell, Mass.) snapped a 14-game scoring drought by netting two goals, including the game-winning tally, against Notre Dame while sophomore defenseman Casey Fitzgerald (North Reading, Mass.) posted a plus-four rating and three assists in the win ... UConn bounced back the setback to Boston College with a 3-1 win over No. 13 Vermont. Rookie netminder Adam Huska (Zvolen, Slovakia) stopped 34 shots Friday night to carry his team to victory, improving to 6-2-2 in Hockey East play in his young career ... Providence extended its win streak to five games with a sweep of New Hampshire, including a 3-0 shutout Friday night from Hayden Hawkey (Parker, Colo.). The Friars are 7-2-1 over their last 10 games, and have just three regulation losses since November 25, 2016 ... Maine took two games from UMass on the weekend in Orono, earning four points in league play and now sit just five points out of seventh place in the league table. Sophomore goaltender Rob McGovern (Weymouth, Mass.) Combined for 72 saves on the weekend as Maine swept the Minutemen by scores of 4-1 and 2-1, respectively ... In Northeastern's lone game of the weekend, two-time defending Warrior Hockey East Player of the Week Dylan Sikura (Aurora, Ont.) scored a natural hat trick against UMass Lowell in the final 7:29 of regulation, including the game-winner with 16.2 seconds left to play. Sikura's three goals erased a 3-1 deficit and propelled Northeastern past the No. 7 ranked River Hawks, 4-3. Sikura now has 10 points in his last four games (4g, 6a) and has factored in on each of the last three game-winning goals for the Huskies (1g, 2a). UMass Lowell fell victim to Boston University the following night, dropping a 4-2 decision to the Terriers. River Hawks freshman forward Ryan Lohin (Chadds Ford, Pa.) had two goals on the weekend, one in each game against Northeastern and Boston University. BU's freshman forward Clayton Keller (Swansea, Ill.) had another four-point (2g, 2a) week, extending his point streak to 13 games dating back to November 4, 2016. He has recorded at least one point in all but two games in which he has appeared so far this season. Meanwhile, Terrier sophomore forward Bobo Carpenter (North Reading, Mass.) matched his career highs in points (3) and goals (2) in the Terriers' 4-2 victory over No. 7 UMass Lowell on Saturday. 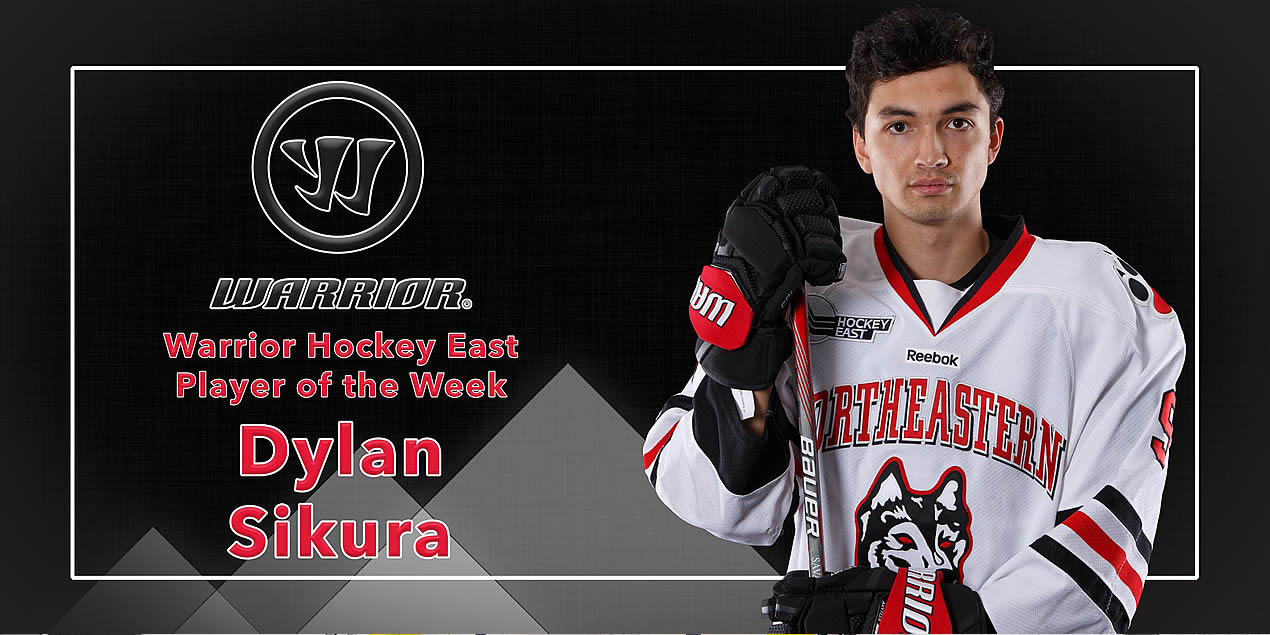 Dylan Sikura (Aurora, Ont.) scored a natural hat trick against UMass Lowell in the final 7:29 of regulation, including the game-winner with 16.2 seconds left to play. Sikura's three goals erased a 3-1 deficit and propelled Northeastern past the No. 7 ranked River Hawks, 4-3. 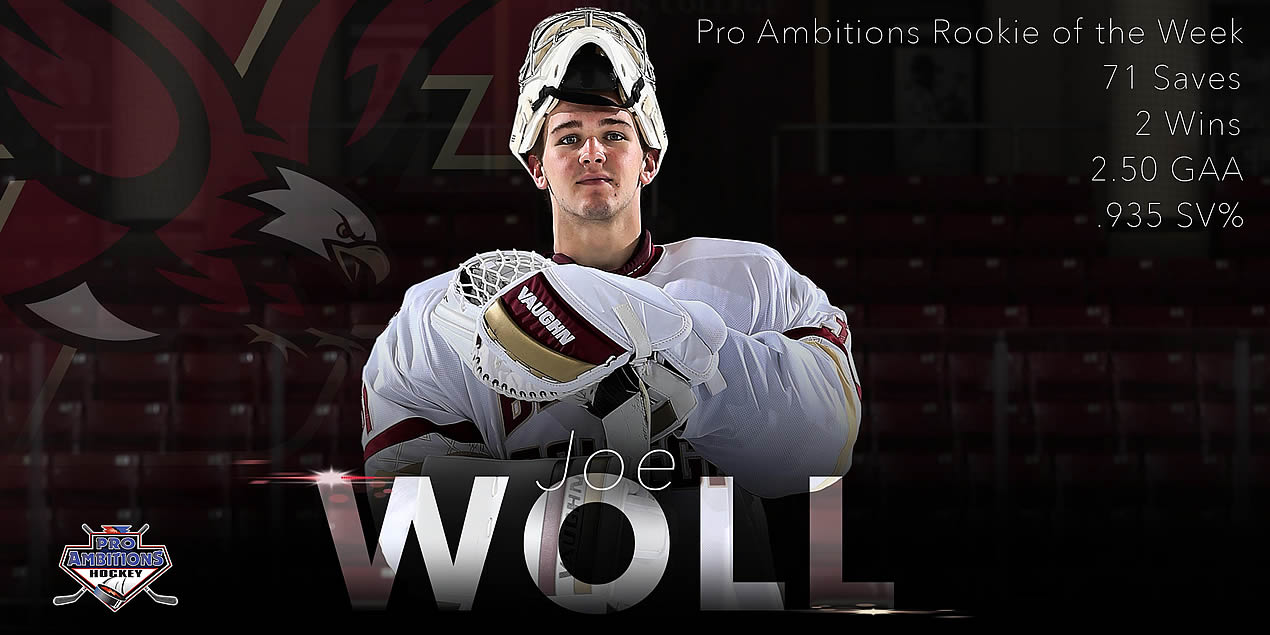 Joe Woll (St. Louis, Mo.) backstopped the Eagles to another four points in league play last week. The freshman goaltender turned away a career high 42 shots in a 2-1 win over UConn on Tuesday night and followed up that performance with 29 saves on Saturday night in the Eagles' dramatic 6-4 win over Notre Dame. 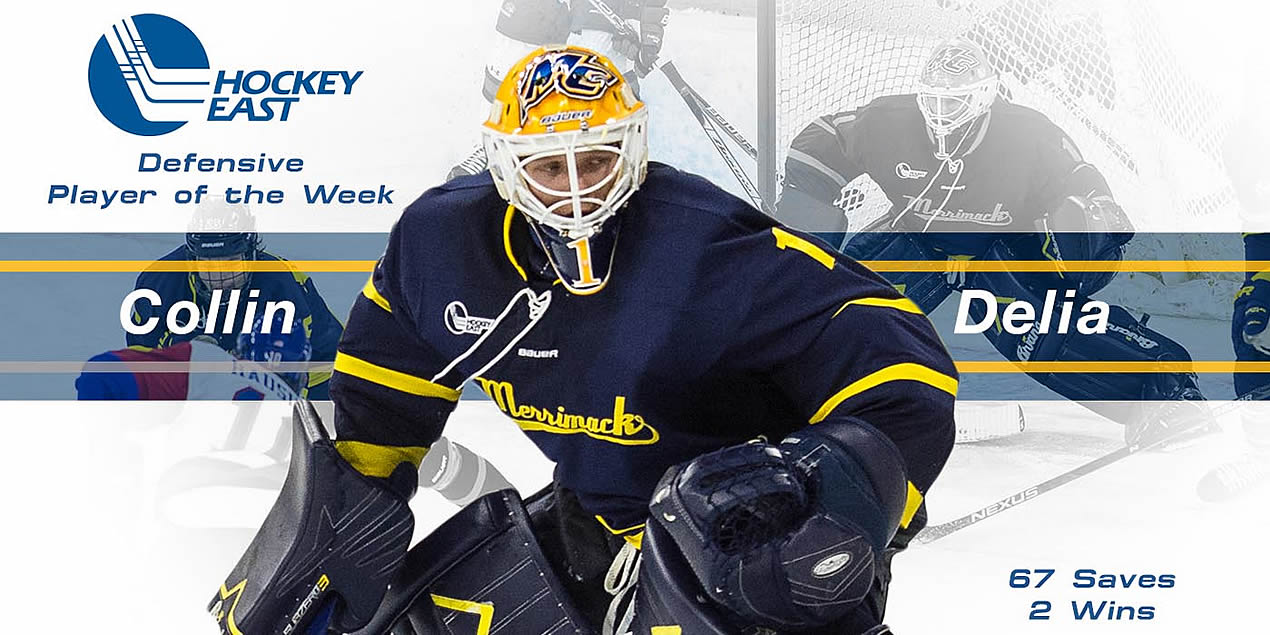 Collin Delia (Rancho Cucamonga, Calif.) In two starts, Delia allowed only two goals against No. 1 Boston University this week, helping the Warriors sweep the Terriers for the first time in school history. Delia turned away 67-of-69 shots, including 37 in Friday's road win. Delia completed the week with a .971 save percentage, and only 1.00 goals per game.

Chris Calnan, BC (Sr., F; Norwell, Mass.) Found the back of the net twice en route to a 6-4 victory over the Fighting Irish on Saturday night. The senior forward's second tally proved to be the game winner with just over 4:00 to go in the third period. This was Calnan's first game-winning goal of the season and sixth of his career.

Casey Fitzgerald, BC (So., D; North Reading, Mass.) Dished out an assist and was a plus-one in a 2-1 win against UConn before adding three helpers and a plus-four rating in the Eagles' 6-4 victory over Notre Dame.

Clayton Keller, BU (Fr., F; Swansea, Ill.) Keller tallied four points (2g, 2a) on the week, highlighted by a performance on Saturday against No. 7 UMass Lowell in which the freshman assisted on the go-ahead goal and scored the game-winner to lead BU to a 4-2 victory over the River Hawks.

Adam Huska, UConn (Fr., G; Zvolen, Slovakia) Turned in a 34-save night to lead the Huskies to a 3-1 victory over No. 11 Vermont on Friday night.

Rob McGovern, ME (So., G; Weymouth, Mass.) Combined for 72 saves on the weekend as Maine swept UMass by scores of 4-1 and 2-1 respectively.

Jared Kolquist, MC (Jr., D; Hermantown, Minn.) Distributed a career-high three assists in Merrimack's 3-1 win against No. 1 Boston University on Tuesday night at Lawler Rink. It was the junior's first multi-point game of the season.

Brett Seney, MC (Jr., F; London, Ont.) Lit the lamp twice to spark Merrimack to a 4-1 win at No. 1 Boston University on Friday night. It marked his second two-goal performance of the season. The junior forward tallied the eventual game-winner to help the Warriors complete their first-ever regular season series sweep over the Terriers.

Ryan Lohin, UML (Fr., F; Chadds Ford, Pa.) Had two goals on the weekend, one in each game against Northeastern and Boston University. Lohin was also productive at the faceoff dot, winning 18 faceoff wins (60%).

Garret Cockerill, NU (Jr., D; Brighton, Mich.) Recorded a pair of assists, including the game-tying goal, in a come-from-behind victory at No. 7 UMass Lowell to extend his point streak to three games (4a).

Andrew Oglevie, ND (So., F; Fullerton, Calif.) Scored a pair of goals in Notre Dame's series finale against Boston College on Saturday night. The sophomore now has 14 goals on the season, which ranks second on the team and is tied for eighth in Hockey East.

Hayden Hawkey, PC (So., G; Parker, Colo.) Recorded his second shutout of the season and third of his career on Friday night as the Friars blanked UNH, 3-0, at the Whittemore Center. The sophomore backboned the Friars to a two-game road sweep against the Wildcats, posting a 1.00 GAA and .960 save percentage.