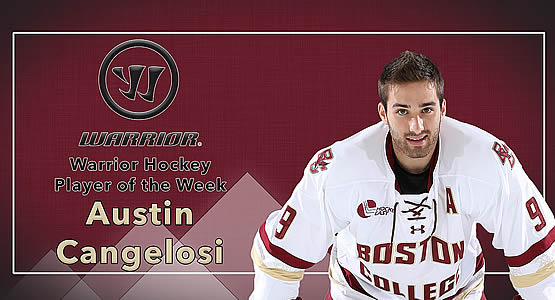 AROUND HOCKEY EAST: No. 5 Boston College extended its NCAA-best unbeaten streak to eight games this weekend with a series sweep over Maine. Senior forward Austin Cangelosi (Estero, Fla.) found the back of the net three straight times to record a natural hat trick by way of an even strength, power-play and shorthanded goal in Friday's 6-1 win. Saturday's finale saw the Eagles claim their first win in Alfond Arena since 2012 as freshman goaltender Joe Woll (Dardenne Prairie, Mo.) stopped 28 of the 30 shots he faced ... No. 4 Boston University took a three-point weekend against defending Hockey East Tournament champion Northeastern. Friday night's showdown at Matthews Arena was a back-and-fourth affair in which Northeastern was able to come back from 2-1, 3-2, and 4-3 deficits in order to force an overtime in a 4-4 stalemate. Senior forward Zach Aston-Reese (Staten Island, N.Y.) had a goal and two assists for the Huskies, including the game-tying goal with under a minute to play in regulation. The series turned in Saturday's series finale at Agganis Arena, as Boston University took a 3-0 decision over Northeastern. Freshman forward Patrick Harper (New Canaan, Conn.) scored two of the Terrier's three goals and rookie netminder Jake Oettinger (Lakeville, Minn.) made 24 saves in his third shutout effort of the season ... No. 6 UMass Lowell earned a series sweep over No. 19 Vermont this weekend at the Tsongas Center. In Friday night's opener, junior forward C.J. Smith (Des Moines, Iowa) scored twice to power the River Hawks to a 3-1 victory. The next night, forwards Jake Kamrass (Atlanta, Ga.) and Ryan Lohin (Chadds Fort, Pa.) each recorded a goal and an assist in a 4-2 win. UMass Lowell's first-year goalie Tyler Wall (Leamington, Ont.) stopped 52 shots in two outings to improve his overall record to 6-1-1 … New Hampshire took on a pair of non-conference opponents this weekend in Sacred Heart and Mercyhurst. The Wildcats skated to a 2-2 draw against Sacred Heart thanks to freshman forward Liam Blackburn (Prince George, B.C.) netting the equalizer with 28 seconds remaining in regulation. In Saturday's matchup against Mercyhurst, junior goaltender Daniel Tirone (Trumbull, Conn.) stopped all 14 shots he faced as the Wildcats shutout the Lakers, 3-0. National Rookie of the Month Patrick Grasso (Ankeny, Iowa) recorded his team-leading ninth goal of the season in the win while UNH senior forward Tyler Kelleher (Longmeadow, Mass.) lead the Wildcats in scoring for the weekend with a goal and two assists … Merrimack earned a 5-1 victory over Atlantic Hockey foe Mercyhurst Friday night, powered by sophomore defenseman Alex Carle (Anchorage, Alaska) and his three assists on the night. Sophomore goaltender Drew Vogler (Florissant, Mo.) stopped 29 of the 30 shots he faced in the victory. On Saturday Merrimack, returned to conference play against Providence. The Friars' Anthony Florentino (West. Roxbury, Mass.) knotted the game at two with just 4:03 remaining in regulation to salvage a 2-2 draw … UConn and UMass met for the first time this year at the Mullins Center Friday night in the lone game for each team last weekend. The Minutemen battled back from a 2-0 deficit and forced a 2-2 stalemate. Sophomore forward Kurt Keats (Winnipeg, Man.) potted the game-tying goal with 6:25 left in the final frame. 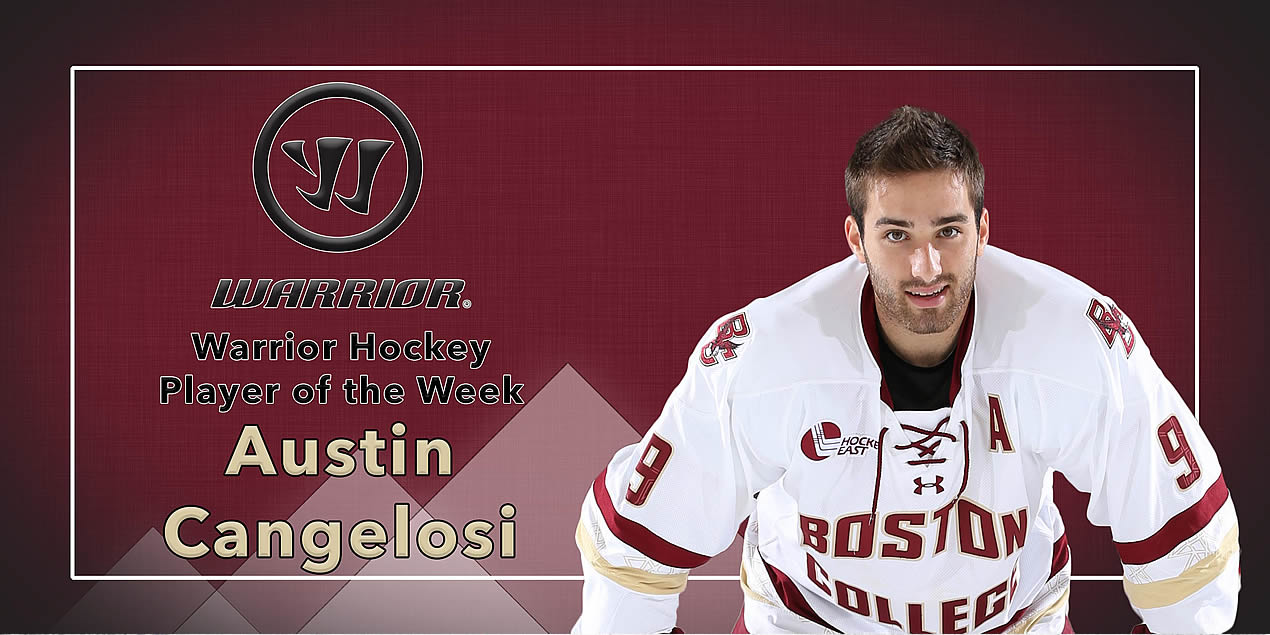 Austin Cangelosi (Estero, Fla.) racked up four points in two wins over Maine, including a natural hat trick with an even-strength goal, power- play goal, and shorthanded goal Friday night, including the game-winning tally in the 6-1 victory. The next night, he dished out an assist in a 3-2 win. He now has five goals in his last three outings and a power-play goal and shorthanded goal in back-to-back games. 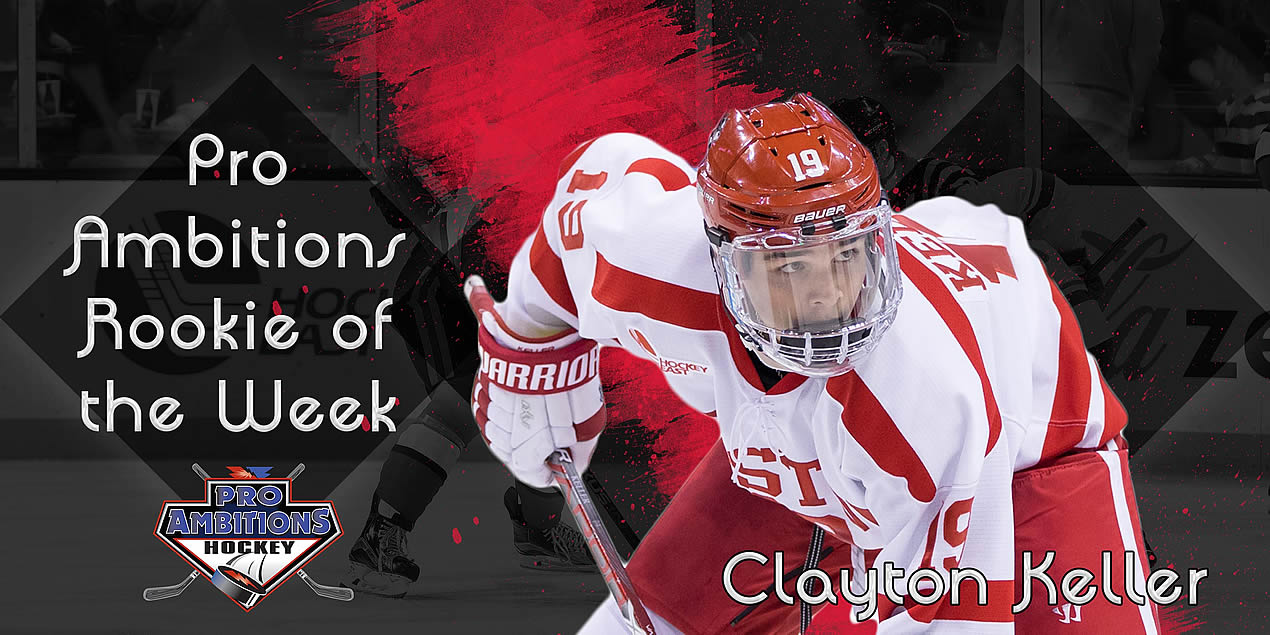 Clayton Keller (Swansea, Ill.) picked up a pair of goals and two assists in a threepoint weekend for the Terriers against the defending Hockey East champion Northeastern Huskies. He scored twice in Friday's 4-4 tie before adding two assists in a 3-0 victory Saturday, including setting up the game-winning strike. 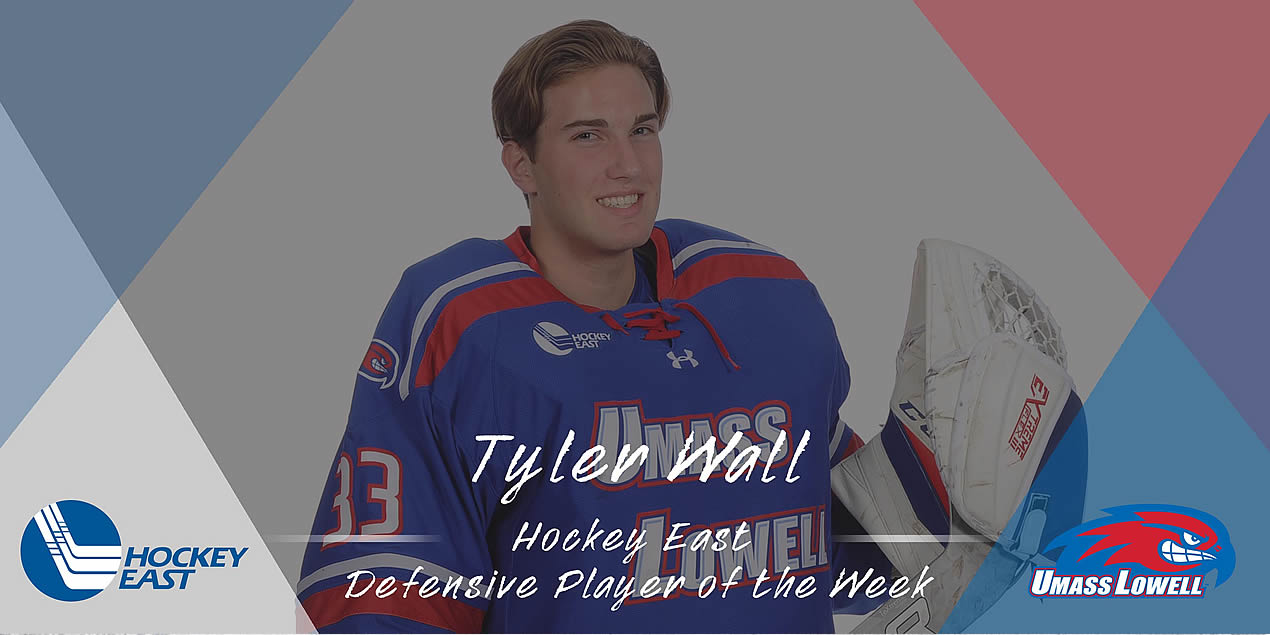 Tyler Wall (Leamington, Ont.) stopped 52 of 55 shots he saw in a two-game home stand against a red-hot Vermont squad to collect two wins over the Catamounts. In a full 120:00 of play, the rookie netminder picked up a 1.50 goals against average and .945 save percentage for the River Hawks to earn his second weekly honor of the season.

Casey Fitzgerald, BC (So., D; North Reading, Mass.) Chipped in three assists in two wins against Maine, including helping to set up the two game-winning strikes on the weekend. He has now factored in on five of the Eagles' eight game-winning tallies.

Ryan Fitzgerald, BC (Sr., F; North Reading, Mass.) Turned in a multi-point performance, netting his 61st career goal for the Eagles, surpassing Ken Hodge and Jim Mullen to move into 36th all-time on the BC career goal-scoring list.

Joe Woll, BC (Fr., G; Dardenne Prairie, Mo.) Made 50 saves over two games against Maine for the Eagles, picking up two wins for Boston College in league play, including the program's first win at Alfond Arena since 2012.

Jake Kamrass, UML (Jr., F; Atlanta, Ga.) Racked up four points (2g, 2a) in the weekend sweep of Vermont at the Tsongas Center, including a three-point night Saturday in a 4-2 win over the Catamounts.

Daniel Tirone, UNH (Jr., G; Trumbull, Conn.) Backboned the Wildcats to a 1-0-1 weekend at home to push UNH's unbeaten streak to four games (3-0-1). Stopped 41 shots and allowed just two goals while picking up a his first shutout of the season Saturday against Mercyhurst.

Zach Aston-Reese, NU (Sr., F, Staten Island, N.Y.) Netted a goal and added two assists in a 4-4 tie with No. 4 Boston University Friday night, including striking for the game-winning tally with just 55.6 seconds left in regulation.

Garret Cockerill, NU (Jr., D; Brighton, Mich.) Scored a goal and dished out an assist in Friday's 4-4 stalemate with the Terriers.

Mario Puskarich, UVM (Sr., F; Ft. Walton Beach, Fla.) Registered a goal and an assist during a two-game set at UMass Lowell, picking up his 90th career point Friday and his 50th helper as a Catamount in Saturday's contest.