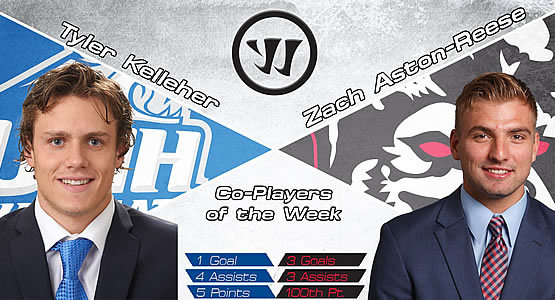 AROUND HOCKEY EAST: Tyler Kelleher (Longmeadow, Mass.) racked up five points (1g, 4a) in a 6-2 win over UMass at the Whittemore Center Friday night. He is the first skater to score five points in a single game in nearly four years (Nov. 24, 2012)... No. 5 UMass Lowell and No. 9 Notre Dame split a two-game set of top-10 teams in South Bend. Friday saw the River Hawks take a 4-1 win behind two goals from C.J. Smith (Des Moines, Iowa) before the Irish struck back with a 4-1 victory the next night. Bobby Nardella (Rosemont, Ill.) tied a career high three points (1g, 2a) in his team's win ... In Collin Delia's (Rancho Cucamonga, Calif.) return after missing 11 games with injury, he pitched a 33-save shutout in a 2-0 win at Wisconsin, helping the Warriors to a weekend split ... Northeastern captain Zach Aston-Reese powered the Huskies during a weekend split with Providence, factoring in on six of the nine goals his team scored (3g, 3a) in a pair of 5-4 decisions. Friars rookie defenseman Jacob Bryson (London, Ont.) had four points of his own (1g, 3a) in the split ... Vermont got a five-point week from rookie Ross Colton (Robbinsville, N.J.) to push to a 2-0-1 record. His two goals and assist Tuesday powered the Catamounts to a 5-2 victory over Dartmouth. Freshman netminder Stefanos Lekkas (Elburn, Ill.) stopped 92 of 98 shots in his three outings, helping to take three points from Maine ... In its only game of the week, Boston College dropped a 5-2 decision to Harvard, snapping its NCAA-best 10-game unbeaten streak. 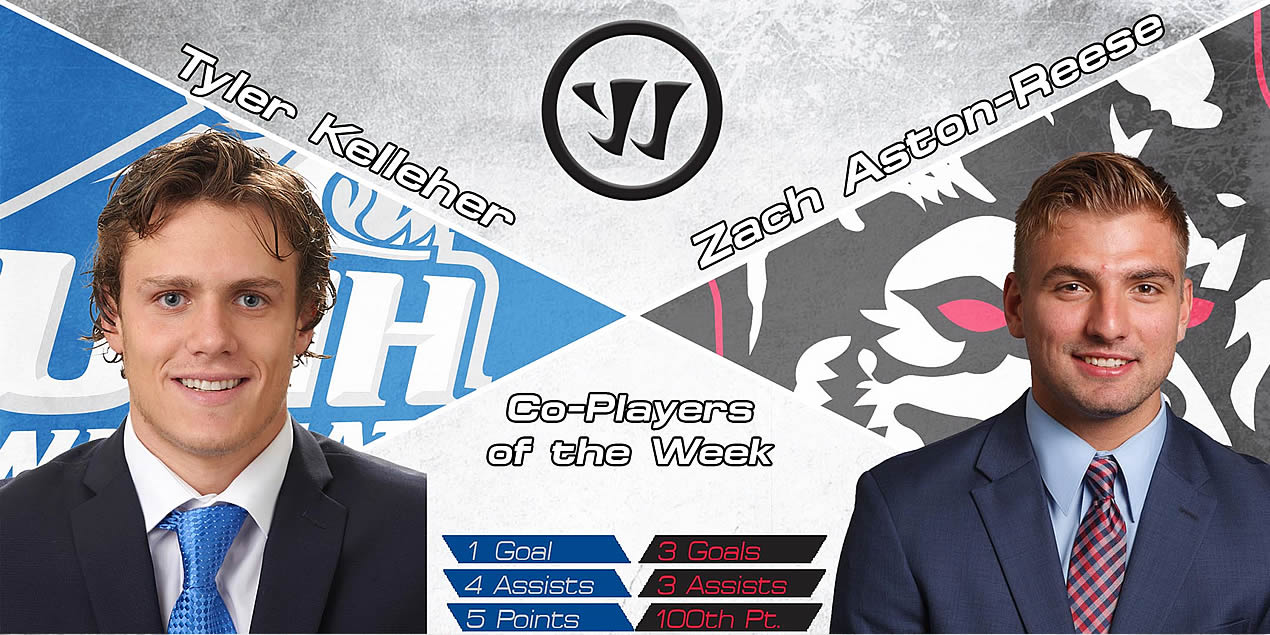 Tyler Kelleher (Longmeadow, Mass.) racked up five points (1g, 4a) in a 6-2 win over UMass at the Whittemore Center Friday night. He is the first skater to score five points in a single game in nearly four years (Nov. 24, 2012).

Zach Aston-Reese (Staten Island, N.Y.) had a hand in six of nine Huskies goals in a weekend split with Providence, scoring three and dishing out a trio of assists. He became the 48th Husky to score 100 career points in the process. 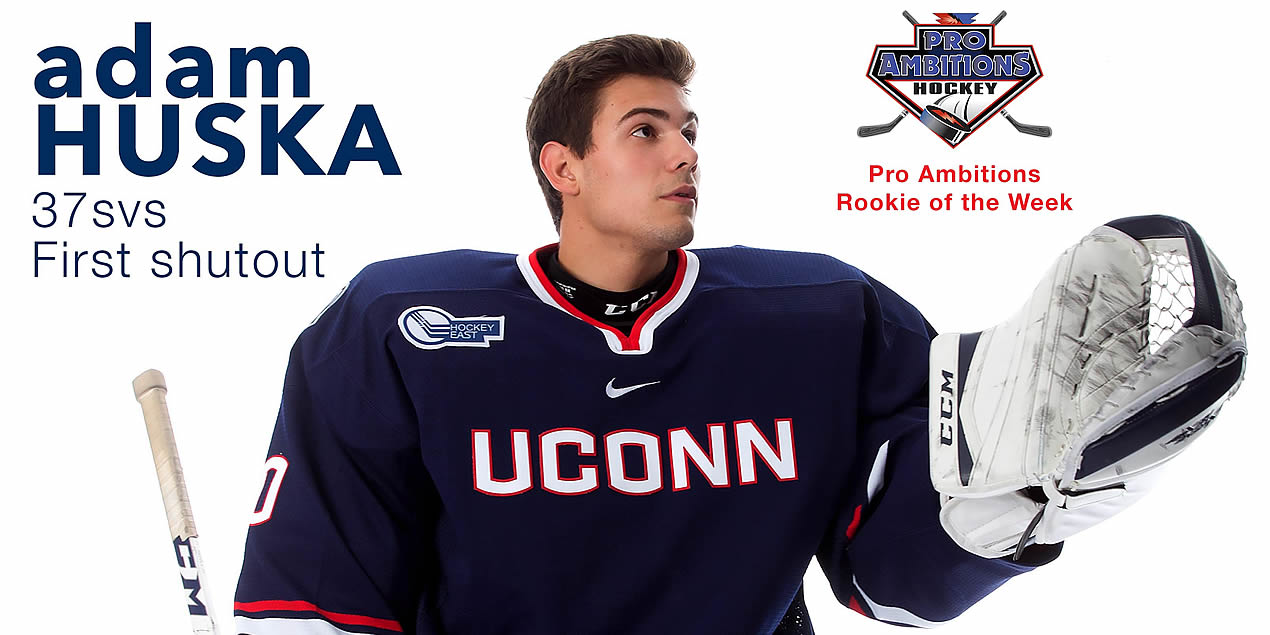 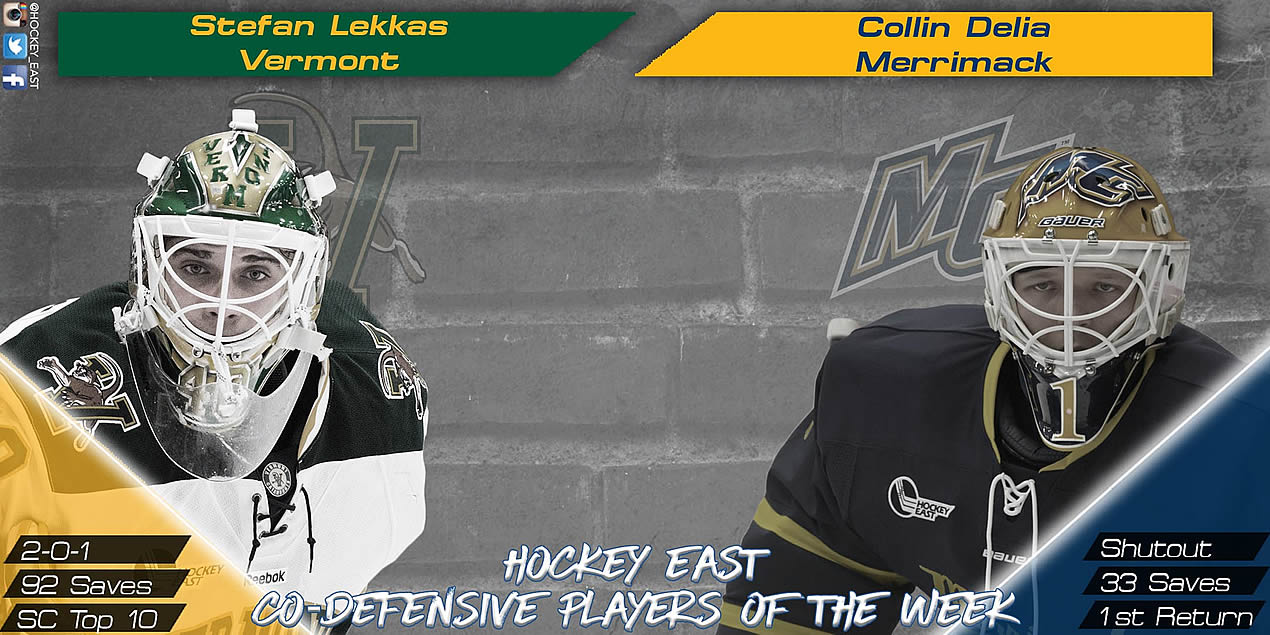 Collin Delia (Rancho Cucamonga, Calif.) stopped all 33 shots he faced to backstop the Warriors to a 2-0 shutout win at Wisconsin, his first appearance in 11 games due to injury.

Stefanos Lekkas (Elburn, Ill.) Went 2-0-1 in three starts to continue his hot start to his career, stopping 92 of 98 shots, including a career high 36 in a 6-2 win over Maine. His diving glove save in the third period Saturday also made an appearance on SportsCenter's Top 10 plays.

Sami Tavernier, MC (Fr., F; Morzine, France) Scored the game-winner in a 2-0 win at Wisconsin and added an assist in Friday's outing.

Jacob Bryson, PC (Fr., D; London, Ont.) Potted a goal and added three assists in a weekend split with Northeastern, bringing his point total to eight (3g, 5a), tied for the most among rookie defensemen in Hockey East.

Ross Colton, UVM (Fr., F; Robbinsville, N.J.) His five-point week helped the Catamounts to a 2-0-1 record, recording his first career multi-goal game Tuesday (2g, 1a) on seven shots on net, and added a goal and an assist Friday.