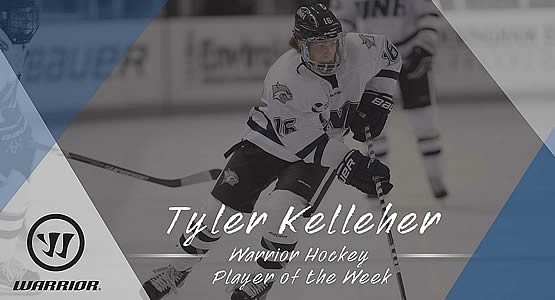 AROUND HOCKEY EAST: No. 7 UMass Lowell traveled for a weekend-sweep of Colorado College. In game one, the River Hawks were led by senior forward Joe Gambardella (Staten Island, N.Y.), whose three-point performance aided in an 8-5 victory. Freshman goalie Tyler Wall's (Leamington, Ont.) second career start in Saturday's finale was an impressive 29-save shutout performance which allowed Norm Bazin's squad to take a 4-0 win ... Maine's freshmen shone again in tight weekend series against No. 3. Quinnipiac. On Friday, Red Gendron's squad overcame a 3-1 deficit in the third period to force extra frames. Freshman forward Mitchell Fossier (Alpharetta, Ga.) then scored the game-winner two minutes into the overtime period to give the Black Bears a 4-3 win. In game two, the Black Bears again scored two third period goals to send the game into an extra frame, ultimately falling, 3-2 ... Saturday's matchup between New Hampshire and Clarkson saw the Wildcats earn their first win of the season. Senior forward Tyler Kelleher (Longmeadow, Mass.) tallied a four-point performance (2g, 2a), including the game-winning goal with 1:39 left to play in the third period to give the Wildcats a 5-3 win ... No. 5 Notre Dame split its weekend series at No. 4 Minnesota Duluth. The Bulldogs took the first game, 4-3, before the Irish responded with a 3-1 victory Saturday. Notre Dame sophomore forward Dylan Malmquist (Edina, Minn.) tallied a goal and two assists in the win ... No. 9 Boston College split its weekend series at Wisconsin. On Friday, the Eagles could not overcome three-straight Badger goals and fell, 3-1. Sunday's matchup was a high-scoring affair, with forward Christopher Brown (Bloomfield Hills, Mi.) recording his first collegiate hat trick. The sophomore, who is associate head coach Greg Brown's nephew, had four points in total (3g, 1a) and the Eagles went on to beat the Badgers, 8-5 ... No. 11 Providence traveled to face Holy Cross for a single non-conference game. The Friars opened scoring late in the third period with a goal from sophomore forward Erik Foley (Mansfield, Mass.), but the Crusaders would come back two minutes later to tie it up and send the game into overtime. Holy Cross forward Johnny Coughlin scored 1:41 into the overtime frame to give the Crusaders the 2-1 win ... No. 14 Northeastern and Bentley played to a tight 1-1 tie Friday before things opened up Saturday night in a 7-3 Huskies win. The three-point weekend was paced by a pair of five-point performances from Zach Aston-Reese (Staten Island, N.Y./2g, 3a) and Dylan Sikura (Aurora, Ont./5a) ... UConn extended its undefeated start to the year in a pair of non-conference draws with Colgate and RIT. On Friday, the Huskies skated to a 4-4 tie with Colgate, as junior defenseman David Drake (Naperville, Ill.) recording a goal and an assist. On Saturday, UConn fell victim to a late third period RIT goal, which resulted in UConn's second draw in as many games ... Merrimack also traveled to upstate New York this weekend for a pair of non-conference tilts against Atlantic Hockey opponents Clarkson and No. 15 St. Lawrence. On Friday, Clarkson was able to shutout the warriors en-route to a 4-0 win. In Saturday's game against St. Lawrence, Hampus Gustafsson (Ljungby, Sweden) scored the lone Merrimack goal of the weekend, but the Warriors were defeated by the Saints, 4-1 ... No. 2 Boston University dropped its weekend series against No. 10 Denver. The Terriers could not overcome a 4-1 Friday deficit despite a two-goal third period comeback, and fell 4-3. In Saturday's series finale, freshman forward Kieffer Bellows (Edina, Minn.) scored his first collegiate goal, but Pioneers took the game, 3-1. 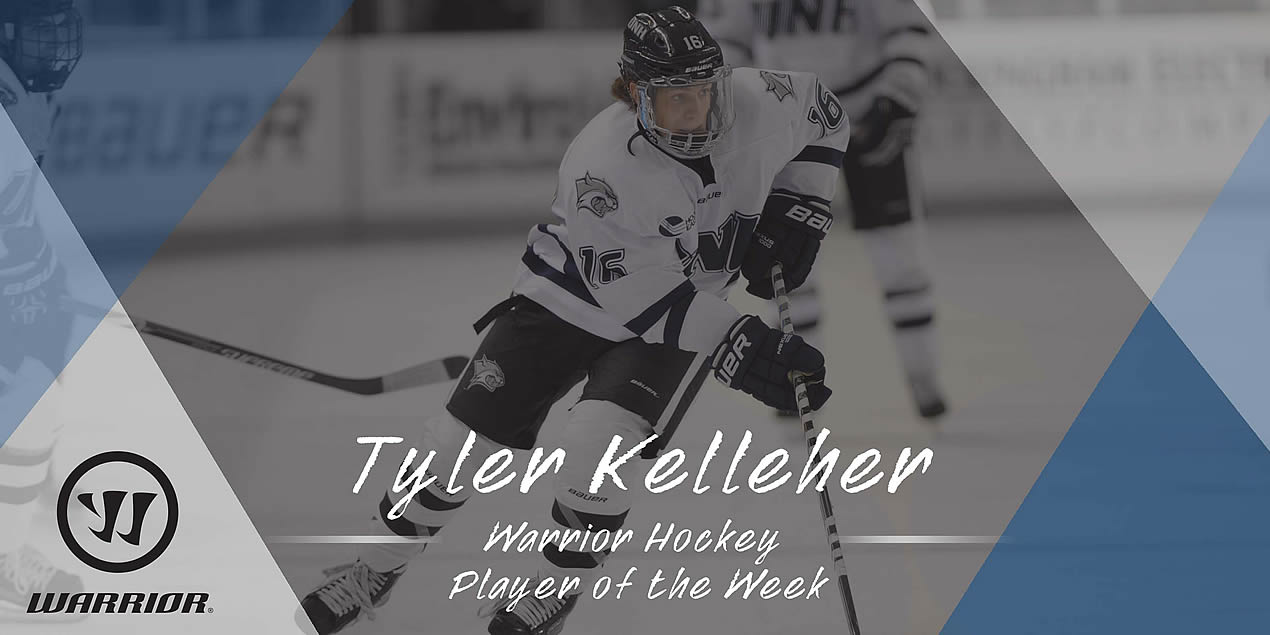 Tyler Kelleher (Longmeadow, Mass.) racked up five points on three goals and two assists in a weekend split with St. Lawrence and Clarkson. Kelleher scored with 1:39 left in the third period against Clarkson and added an empty-netter in a 4-3 win against Clarkson Saturday. 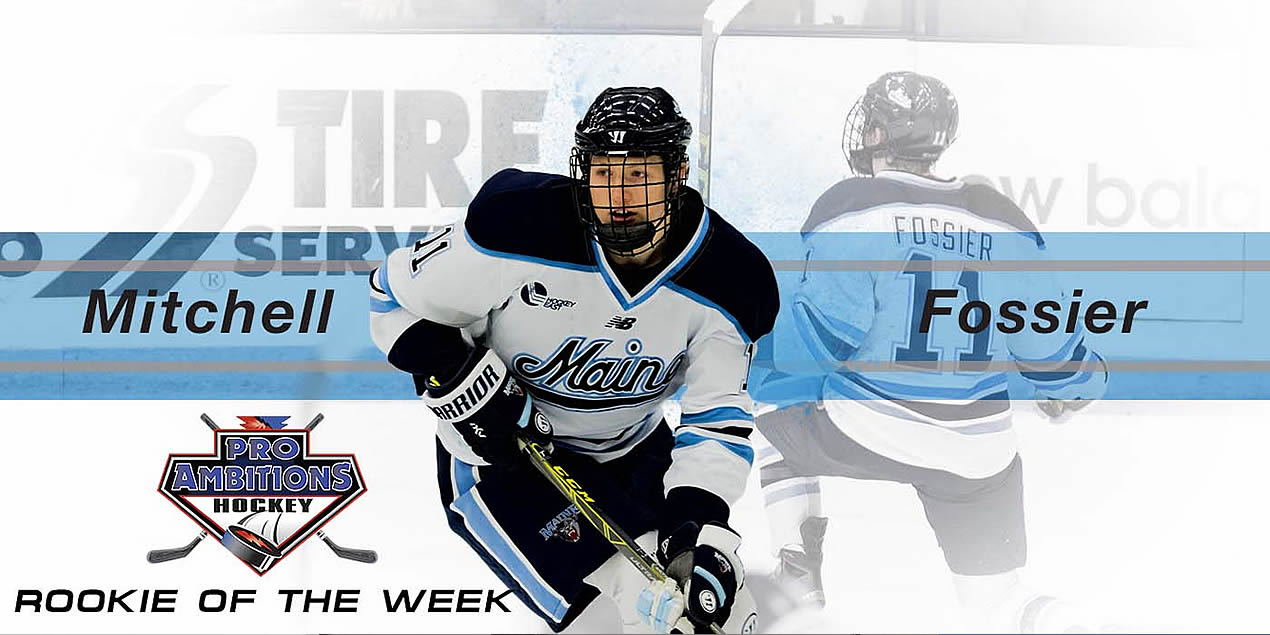 Mitch Fossier (Alpharetta, Ga.) continued his role as hero for the Black Bears, tacking on two assist and netting the game-winning, overtime goal to down Quinnipiac Friday night, his third decisive goal in as many games. Saturday, he chipped in on the game-tying goal to force overtime against the Bobcats. 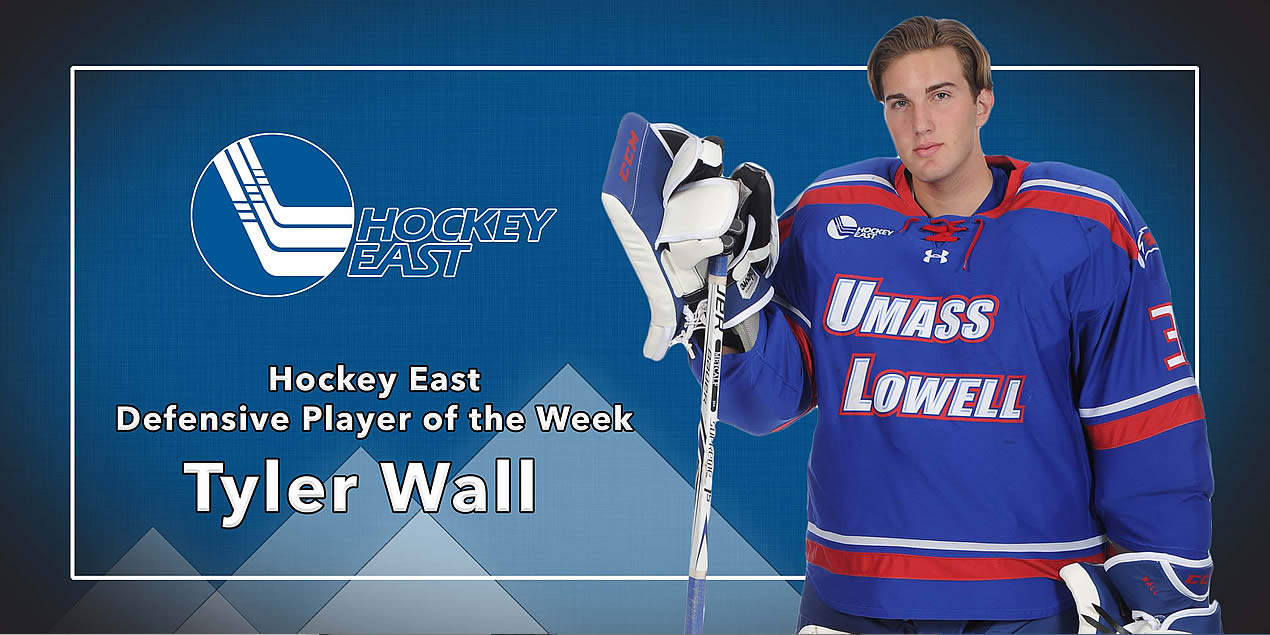 Tyler Wall (Leamington, Ont.) picked up a pair of road wins at Colorado College, stopping 42 saves on 44 shots. His 29 saves on Saturday night proved to be good for his first career shutout, as he compiled a 1.20 goals against average and .955 save percentage in the two outings.

Adam Huska, UConn (Fr., G; Zvolen, Slovakia) The freshman goaltender made his collegiate debut on Saturday night against RIT. Huska made 36 saves over the three periods and overtime, allowing just one goal en route to a 1-1 tie.

Patrick Shea, Maine (Fr., F; Marshfield, Mass.) Shea played a key role in Maine's upset victory over No. 3 Quinnipiac. Shea recorded an assist to pull the Black Bears within one goal, and then scored the game-tying goal late in the third period to send the game into overtime.

Patrick Grasso, UNH (Fr., F; Ankeny, Iowa) Grasso had a four-point weekend on three goals and one assist in a pair of games. He scored his first collegiate goal and assist against St. Lawrence on Friday while scoring a pair of goals in UNH's 5-3 win over Clarkson on Saturday.

Matias Cleland, UNH (Sr., D; Longmont, Colo.) Cleland notched three assists in two games this weekend. He tallied one at St. Lawrence on Friday and two against Clarkson on Saturday.

Zach Aston-Reese, NU (Sr., F; Staten Island, N.Y.) Aston-Reese had two goals and three assists in two games against Bentley, helping the Huskies go 1-0-1 on the weekend. Four of his five points came on the power play (1-3-4). The senior also had a career-high four points (2g, 2a) in Saturday night's 8-5 victory.

Andrew Oglevie, ND (So., F; Fullerton, Calif.) Scored two power play goals and recorded and assist in a three-point performance this weekend against No. 4 Minnesota Duluth. Oglevie also led the Fighting Irish with 14 shots on goal.