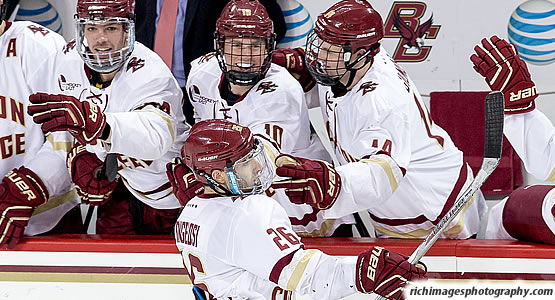 - Heading into the final weekend of the season, Boston College (14-1-5 HEA) has already clinched a first round bye in the Hockey East Tournament and can secure the No. 1 seed with two points this weekend against UMass Lowell. Boston College also owns the longest unbeaten streak in the country at 14 games (10-0-4). The River Hawks (11-5-4 HEA) head into the series tied for fourth place with 26 points and also looking to secure a bye.

- UMass Lowell won its only game of the weekend last week, defeating Massachusetts, 4-2, at the Tsongas Center in non-conference action. Boston College was able to take four points last weekend up at Gutterson Fieldhouse, defeating the Catamounts, 3-1, Friday night and following that up with a 4-1 victory on Saturday to reclaim sole possession of first place in Hockey East.

- Ryan Fitzgerald (North Reading, Mass.) had a three-point night in the second game against Vermont last weekend netting two goals and dishing out an assist. He now boasts a 18-20--38 stat line on the season.

- Leading River Hawk point-getter C.J Smith (Des Moines, Iowa) accounted for two points in the victory against Massachusetts on a goal and an assist. Smith now has 14-18--32 on the season.

- Providence (14-3-3 HEA) enters the final weekend of the regular season in second place and has already secured an opening round bye in the Hockey East tournament and home ice in the quarterfinal round.

- Providence hosted Notre Dame last weekend in a pivotal series and came away with a big four points to clinch an opening round bye. The Friars defeated the Irish, 3-2, in overtime Friday night and picked up a 3-1 victory Saturday. The Friars have now won six games in a row.

- Trevor Mingoia (Fairport, N.Y.) netted the overtime winner Friday night. Mark Jankowski (St. Catherines, N.Y.) tallied points for the Friars on both nights and now has points in five straight games. Nick Ellis (Millersville, Md.) was strong for Providence, picking up the victory on both nights and making 54 saves.

- Massachusetts (2-14-4 HEA) heads in the weekend in 12th place in Hockey East with eight points but has the potential to finish as high as 10th.

- The Minutemen were defeated in their only game of the weekend, 4-2, at the Tsongas Center.

- Shane Walsh (West Roxbury, Mass.) netted his team-leading 17th goal of the season against the River Hawks. Walsh's 17 goals rank him tied for 17th nationally. Walsh now has 27 points on the season.

- Boston University (11-5-4 HEA) is in a precarious position in the Hockey East table, sitting tied for fourth with 26 points. The Terriers can clinch an opening round bye with four points against Notre Dame this weekend, collecting more points than UMass Lowell does against Boston College, or splitting the weekend if UMass Lowell ties twice. BU will also secure the bye if they get zero points and UMass Lowell also gets zero points.

- Notre Dame (14-4-2 HEA) is in third place with 30 points and can clinch an opening round bye with just one point against the Terriers this weekend or if UMass Lowell drops at least one point to Boston College.

- Boston University picked up three points last weekend against New Hampshire to keep pace at the top of the league. The Terriers were led on Friday night by Hockey East Warrior Player of the Week Danny O'Regan (Needham, Mass.), who netted a hat trick in a 3-3 overtime tie. O'Regan followed that up with a goal on Saturday in a 3-2 victory at the Whittemore Center for four goals on the weekend. Freshman Jordan Greenway (Canton, N.Y.) also tallied three points on the weekend on three assists.

- Notre Dame was swept for the first time in 2015-16 by Providence last weekend. The Irish fell to Providence, 3-2, in overtime Friday night and, 3-1, Saturday night.

- Jake Evans (Toronto, Ont.) netted his eighth goal of the season Friday and now has 32 points on eight goals and 24 assists. Evans' 24 assists rank him fifth in Hockey East and 10th nationally. Freshman Anders Bjork (Mequon, Wisc.) was a plus-three for the Irish on the weekend. Bjork's plus-19 rating ranks him tied for first in Hockey East and tied for seventh nationally.

- Maine (5-13-2 HEA) sits 10th in Hockey East with 12 points while Northeastern (8-8-4 HEA) is currently riding a five-game winning streak and are 12-1-2 in their last 15 games. The Huskies have locked in to sixth place and have secured home ice in the opening round next weekend.

- Northeastern picked up four points last weekend in a home-and-home series with Connecticut. Kevin Roy (Lac-Beauport, Quebec) netted two goals for Northeastern in a 5-2 victory at the XL Center on Friday night. Roy followed that up with a goal and an assist in a 4-1 victory on Saturday, for four points on the weekend

- Northeastern goaltender Ryan Ruck (Cote De Caza, Calif.) was named Pro Ambitions Rookie of the Week for his efforts against UConn. Ruck picked up the victories both nights and improved to 12-10-4 on the season.

- Maine fell to Merrimack last Friday night, 6-4, before rebounding for a 3-2 overtime victory on Saturday. Daniel Perez (Bloomfield, N.J.) picked up the overtime winner for the Black Bears on Saturday.

- Steven Swavely (Reading, Pa.) tallied four points on the weekend on a goal and three assists. Swavely ranks third on the team in points with a 9-10--19 stat line.

- Merrimack split with Maine last weekend, picking up a 6-4 victory on Friday night before falling to the Black Bears, 3-2, on Saturday.

- Michael Babcock (Northville, Mich.) picked up the eventual game-winner on Friday night. Hampus Gustafsson (Ljungby, Sweden) had his fifth multi-point game of the season tallying three points on a goal and two assists. Gustafsson is second on the team in points with an 8-14--22 stat line.

- Vermont was swept by Boston College last weekend at Gutterson Fieldhouse. The Catamounts fell, 3-1, on Friday night and suffered a 4-1 setback on Saturday night.

- Mario Puskarich (Fort Walton Beach, FL.) picked up his ninth goal of the season on Friday night. Puskarich leads the Catamounts in points with 26 on nine goals and 17 assists.

- New Hampshire (4-10-6 HEA) occupies the eighth and final home-ice spot in the Hockey East opening round with 14 points. The Wildcats can secure home ice in the opening round by picking up four points against UConn. Connecticut (4-12-4 HEA) sits tied for 10th with Maine with 12 points.

- New Hampshire tied Boston University, 3-3, at the Whittemore Center on Friday night. Daniel Tirone (Trumbull, Conn.) was strong for the Wildcats making 37 saves. The Wildcats would eventually fall to the Terriers at home on Saturday night, 3-2.

- UConn was swept in a weekend series against Northeastern last weekend falling to the Huskies, 5-2, on Friday night and dropping a 4-1 decision Saturday night.

- Associate Head Coach Mike Souza of New Hampshire heads back to the XL Center for the first time Friday night since he last coached with the Huskies a year ago.