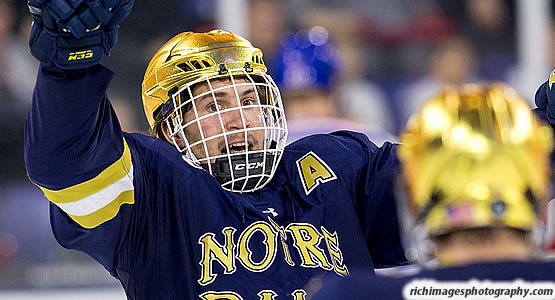 - Boston College split a weekend series with Merrimack last weekend. The Eagles defeated Merrimack Friday night at home, 6-3, behind a three-point night from Zach Sanford (Auburn, N.H.) (2g, 1a), before tying the Warriors at Lawler Rink, 5-5, on Saturday night.

- Boston College is now unbeaten in their last 12 games (8-0-4). The Eagles (12-1-5 HEA) head into the weekend in second in Hockey East with 29 points, one point behind Notre Dame for the top spot. A win this weekend would secure an opening round bye for the Eagles.

- Vermont split a weekend series with New Hampshire last weekend. The Catamounts defeated New Hampshire, 3-2, on Friday, before tying the Wildcats, 2-2, on Saturday.

- Vermont (6-9-3 HEA) currently sits in seventh place with 15 points, with games against BC and at Merrimack remaining. Vermont could finish as high as fifth place and as low as 11th place.

- Providence was able to pick up four points last weekend with a weekend sweep of UConn. The Friars (12-3-3 HEA) are currently in third place with 27 points, trailing second place Boston College by two points. Providence can secure an opening round bye with sweep of Notre Dame this weekend.

- Freshman Hayden Hawkey (Parker, Colo.) registered his first career shutout in a 4-0 victory Friday night in only his second collegiate start between the pipes. The Friars followed that up with a 3-2 victory on Saturday behind two John Gilmour (Montreal, Que.) goals.

- Notre Dame swept a weekend series at Alfond Arena last weekend and now have won four games in a row. The Irish sit in first place (14-2-2 HEA) and will clinch an opening round bye with two points.

- Freshman Jordan Greenway (Canton, N.Y.) was named Hockey East Pro Ambitions Rookie of the Week for the second straight time for his efforts last weekend. Greenway had a goal an assist in two games, including the game-winning goal in Friday night's victory.

- New Hampshire hosted Vermont last weekend and came away with one point, losing to the Catamounts, 3-2, on Friday night, and tying on Saturday, 2-2. Andrew Poturalski (Williamsville, N.Y.) was able to take over the lead for Hockey East scoring with a three-point weekend (1g, 2a), and now has 47 points on the year (22g, 25a).

- New Hampshire (4-9-5 HEA) heads into the weekend in eighth place with 13 points in the final spot for home ice in the opening round. With four games remaining, the Wildcats can finish anywhere from sixth place to 11th place.

- UMass Lowell split with Boston University last weekend, falling at Agganis Arena, 2-1, in overtime, but were able to regain their stride with a 6-3 victory at the Tsongas Center Saturday. The River Hawks also traveled to Springfield, Mass., to face off with AIC, earning 5-4 victory this past Tuesday.

- UMass Lowell (11-5-4 HEA) squares off in a non-league game with UMass on Friday night, sitting fourth in Hockey East with 26 points.

- Massachusetts was swept by Northeastern last weekend in a home-and-home series. The Minutemen fell to Northeastern, 5-0, at the Mullins Center on Friday night and were defeated again on Saturday, 4-2, at Matthews Arena.

- Massachusetts (2-14-4 HEA) currently sits in 12th place in Hockey East with eight points, but has the potential to climb into the 10th spot

- Merrimack earned one point last weekend in a home-and-home series with Boston College. The Warriors fell to Boston College at Conte Forum, 6-3, Friday night, and were able to skate to a stalemate the Eagles Saturday, 5-5.

- Merrimack (2-9-7 HEA) heads into the series at Maine in 10th with 11 points. The Warriors seven stalemates are one shy of the single-season record of eight, held by the 2012-13 Maine Black Bears and 2006-07 Boston University Terriers.

- Maine (4-12-2 HEA) enters the penultimate weekend just one point behind Merrimack for the 10th spot with 10 points.

- Northeastern continued its surge in the Hockey East standings with a big four-point weekend last weekend against Massachusetts. Northeastern defeated UMass, 5-0, at the Mullins Center and followed up with a 4-2 victory on at Matthews Arena. The Huskies (6-8-4 HEA) now sit sixth and look to be primed to host the opening round of the playoffs.

- Nolan Stevens (Sea Isle City, N.J.) was named Warrior Hockey Player of the Week after tallying five points on the weekend (3g, 2a).

- UConn was swept by Providence last weekend, falling to the Friars, 4-0, on Friday night, and 3-2 on Saturday night.

- Rob Nichols (Dallas, Texas) returned to the Huskies' lineup last weekend, registering 41 saves on Friday night and turning in a 25-save effort on Saturday. Freshman Max Letunov (Moscow, Russia) picked up a pair of assists in Saturday's loss and is now tied for the UConn Division I rookie record for points in a season (15g, 18a, 33pt).

- Connecticut (4-10-4 HEA) heads into the weekend in ninth in Hockey East with 12 points, battling for a home ice spot in the opening round. With four games left against sixth-place Northeastern and eighth-place New Hampshire, UConn could shake up the standings in the final weekends.