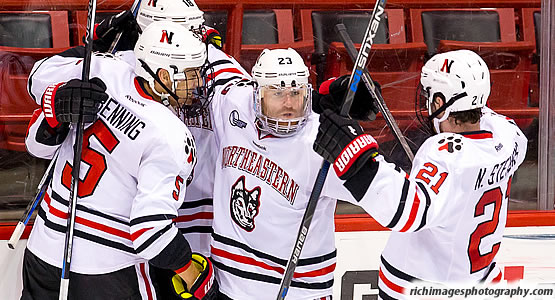 The Huskies are undefeated over their last eight games

Looking at the way the Northeastern men's hockey team played since the calendar flipped to 2016, they appear to be a team battling for a top seed in the upcoming Hockey East Tournament. The Huskies have now gone eight straight games without a loss, including a 3-3 draw with the current top-ranked team in the country.

Jim Madigan's squad's current run is a far cry from how it's season began. Through the first 18 games of 2015-16, Northeastern accumulated a 3-12-3 record and sat in last place in the Hockey East standings with just three points in league play. Fast forward entering Beanpot week, and the Huskies have won their last four league games to pull into seventh place and are storming into February with momentum.

Northeastern players and coaches are no strangers to mid-season swings. Through 19 games last season they put together a 6-11-2 record before turning things around and going 10-6-2 in the final 18 games, including the Beanpot and conference tournament.

For the fans, the reversal of fortune is displayed in the form of wins; but the players know that it starts on the practice ice. For added inspiration Northeastern turned to a local team who is no stranger to championship success.

"Here at Northeastern we, especially our team, we try to model around the Patriots," said junior defenseman Matt Benning (St. Alberta, Alberta). "They are a really good team and they talk about their practice habits. They practice so hard that in games it comes naturally and I think that we are trying to do the same thing; weather its stopping on pucks in practice, not giving up, or not quitting."

This year's miraculous turnaround began Dec. 19 with a win over Michigan State in the Northeastern Winter Showdown – a three sport clash with the Spartans that took place at Matthews Arena. Following a 2-1 victory over the green and white, the Huskies skated to a 3-3 stalemate with Quinnipiac Jan. 2 and has put together six straight wins entering into the first round of the Beanpot against No. 10/9 Boston University next Monday.

The Huskies' recent run can also be attributed to the team finding their identity, which can often take teams time as they sort out roles among the roster.

"I think the change; it's not a drastic change but we've been kind of just playing into our identity even more," senior forward Mike McMurty (Greely, Ontario) said. "We want to be one of those teams that has a really good backcheck and we're relentless on pucks and it seems that everyone has been really committed to that over the past couple of games."

"It helps when you have production from all four of your lines. Whenever you can get that than you obviously see the difference in the win column, and that's what has been happening for us."

Northeastern has shown just how well it can play when everything is clicking, but a more reflective example of a team's success can be found when things aren't going as well; a team's true character is shown in times of adversity. The resiliency the Huskies displayed during an early 12-game winless streak makes them appreciate their unbeaten streak without losing focus.

"Sometimes it's harder when you're not winning. But I think for our team, the reason we got out of that is because we didn't have a bad attitude," Benning said. "I think as a team we came to the rink and said, 'You know we aren't winning so what can we do better?'.

Entering the Beanpot on such a hot streak, Northeastern will have to continue to bring its A-game into one of the top collegiate tournaments on the calendar. If the Huskies are to top the No. 9/10 Terriers and advance to the Beanpot final for the fourth straight year, awaiting them on the TD Garden ice will be either No. 5 Boston College or seventh-ranked Harvard.

Winning the Beanpot and the Hockey East Tournament Championships are two goals for this Huskies team. Thanks in part to a rough start, Northeastern has fought an up-hill battle working toward those lofty expectations, but the players have stayed positive and are now playing as confident as ever.

"Every game we were losing we knew we were right with the team, so we knew that we were just as good as anybody," said junior forward John Stevens (Sea Isle City, N.J.).

"We have our eyes set on winning a championship for this team. We are just going to keep building off of what we've done the past couple of weeks and try to get better every day. Hopefully we can have a shot at accomplishing our goals."