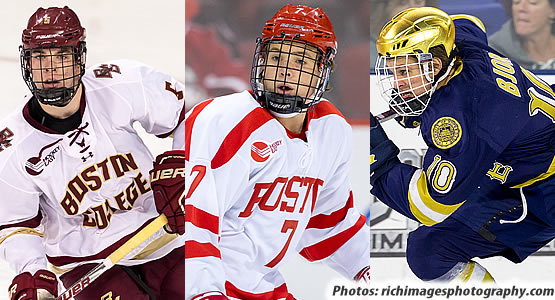 Fitzgerald, a rookie defenseman with the Eagles, has two goals and nine assists in 15 games played this year on The Heights. He spent two years with USA Hockey's National Team Development Program, then in Ann Arbor, Michigan, and was a member of the gold-medal winning U.S. Men's National Under-18 Team at the 2015 IIHF U18 World Championship. White currently leads Boston College in scoring with eight goals and 15 assists for 23 points. He was named the Warrior Hockey East Rookie of the Month and Hockey Commissioner's Association National Rookie of the Month for November. Among all NCAA freshmen, the forward's 15 assists and 23 points are tops in the country. He is currently riding 10-game point streak dating back to Oct. 30 (6g, 14a). White was a two-year member of the NTDP and scored the gold-medal-winning overtime goal as an alternate captain with the 2015 U.S. Men's National Under-18 Team.

Fortunato, a sophomore defenseman for the Terriers, sits third on the team and second among all NCAA defenseman in scoring with 14 points (4g, 10a). In just 15 games in his second year at BU, Fortunato has already surpassed his goal total of last year (1) and is only four points away from setting a new single-season career high. He has netted two game-winners for the Terriers, who are 4-0-0 whe n Fortunato finds the back of the net. Fortunato spent two seasons in a Team USA sweater with the NTDP, winning gold at the IIHF U18 World Championship in 2014. McAvoy has recorded seven points (1g, 5a) in 15 games with the Terriers in his rookie season. He was member of the U.S. National Under-17 and Under-18 Teams alongside Fitzgerald and White, helping the squad capture the 2015 IIHF U18 World Championship gold medal. He was the top-scoring defenseman for the NTDP in 2014-15, registering 40 points on seven goals and 33 assists in 54 appearances. Bjork, in the middle of his sophomore campaign with the Notre Dame Fighting Irish, is ranked second on the team in scoring with five goals and 10 assists for 15 points. The Meq uon, Wisconsin native recorded 22 points (7g, 15a) in 44 games as rookie, including five goals and nine assists in league play, good for ninth among freshmen. Bjork also spent two seasons in red, white, and blue with the NTDP, securing IIHF gold in 2014 alongside Fortunato. Forsbacka Karlsson ranks tied for third among Hockey East rookies with nine points (3g, 6a). Before joining the Terriers, he led the Omaha Lancers (USHL) in scoring with 53 points on 15 goals and 38 helpers in 50 games. He was named co-MVP of the USHL/NHL Top Prospects Game and collected a gold medal with Sweden's national under-17 team at the 2013 World Under-17 Hockey Challenge. Hickey, also a sophomore defenseman for the Terriers, is tied for the lead among blueliners with four goals in Hockey East games. His five goals and two assists overall rank t hird on the team among defensemen. As a fresh - man in 2014-15, Hickey led all Hockey East skaters in blocked s hots (49) and finished fifth among defensemen with 10 points in league play. He has previously skated for Canada West in the 2013 World Junior A Challenge, winning a bronze medal, and as a member of the 2013 Canada Pacific squad at the World Under-17 Hockey Challenge.

Lagesson, a freshman defenseman for the Minutemen, has scored two goals and dished out four assists in 17 games in 2015-16. Prior to his enrollment at Massachusetts, Lagesson skated for Team Sweden in 65 international tilts at four different age levels. He appeared in the 2015 IIHF World Junior Championship, helping to lead Sweden to the bronze-medal game and captured gold at the 2013 World Under-17 Hockey Challenge alongside Forsbacka Karlsson. In 2014-15, Lagesson registered 16 points (2g, 14a) for the USHL's Dubuque Fighting Saints. Walman ranks in the top 10 of all NCAA Skaters with 11 goals and 8 assists for 19 points in 14 games in 2015-16. Among all collegiate defensemen, Walman ranks first in goals (11 ), points (19), power-play goals (6), power-play points (10), game-winning goals (4) and hat tricks (1). A dual citizen of Canada and the United States, Walman skated for each nation's respective junior evaluation camps last summer.