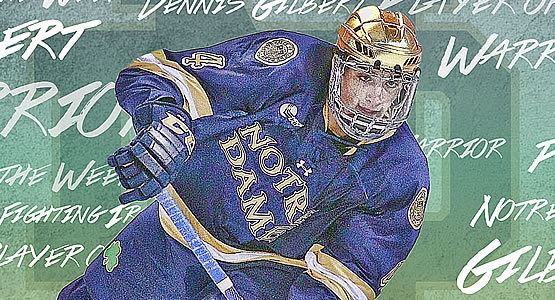 AROUND HOCKEY EAST: No. 11/12 Boston University snapped No. 2 Quinnipiac's unbeaten streak with a 4-1 win Saturday night, using two goals off the stick of Matt Lane (Rochester, N.Y.) and a 36-save effort from Sean Maguire (Powell River, B.C.). The Terriers are now undefeated in three contests against the top two ranked teams in the NCAA, having tied twice with No. 1 Providence earlier this year ... No. 18 Notre Dame completed a dramatic, 4-3, come-from-behind win at No. 3 Boston College Thursday night. Dennis Gilbert (Williamsville, N.Y.) scored the decisive goal with 22 seconds left in regulation to secure the win for the Irish. He also added an assist in the contest ... Vermont split a home-andhome weekend series with No. 13 St. Lawrence. In Friday night's 4-0 win at Gutterson Fieldhouse in Burlington, Vermont, rookie netminder Packy Munson (Hugo, Minn.) stopped 23 shots and picked up the shutout in his collegiate debut. He became the first Catamount since 2004 to pitch a blank sheet in his first game with Vermont. He followed that up with a 28-save performance on Saturday at St. Lawrence ... No. 1 Providence pushed its unbeaten streak to 19 games (16-0-3) with a 4-1 win in Game 1 of the 2015 Mayor's Cup over Brown. Nick Saracino (St. Louis, Mo.) tallied the 100th and 101st points of his Friar career with a pair of helpers in the victory, while Bryan Lemos (East Providence, R.I.) netted his first goal as a Friar. Lemo's strike proved to the be game-winning marker ... New Hampshire claimed victory in its only tilt last week, a 6-3 win over Dartmouth Friday night. Maxim Gaudreault (Annapolis, Md.) struck twice for the Wildcats, capping a four-goal first period with the eventual game-winning marker ... Merrimack and UConn skated to a 3-3 draw in Hartford, Connecticut Saturday night. Three different goal scorers paced the Warriors while Husky rookie defenseman (Spring Lake, N.J.) scored at 18:41 of the third period to tie the game for UConn. 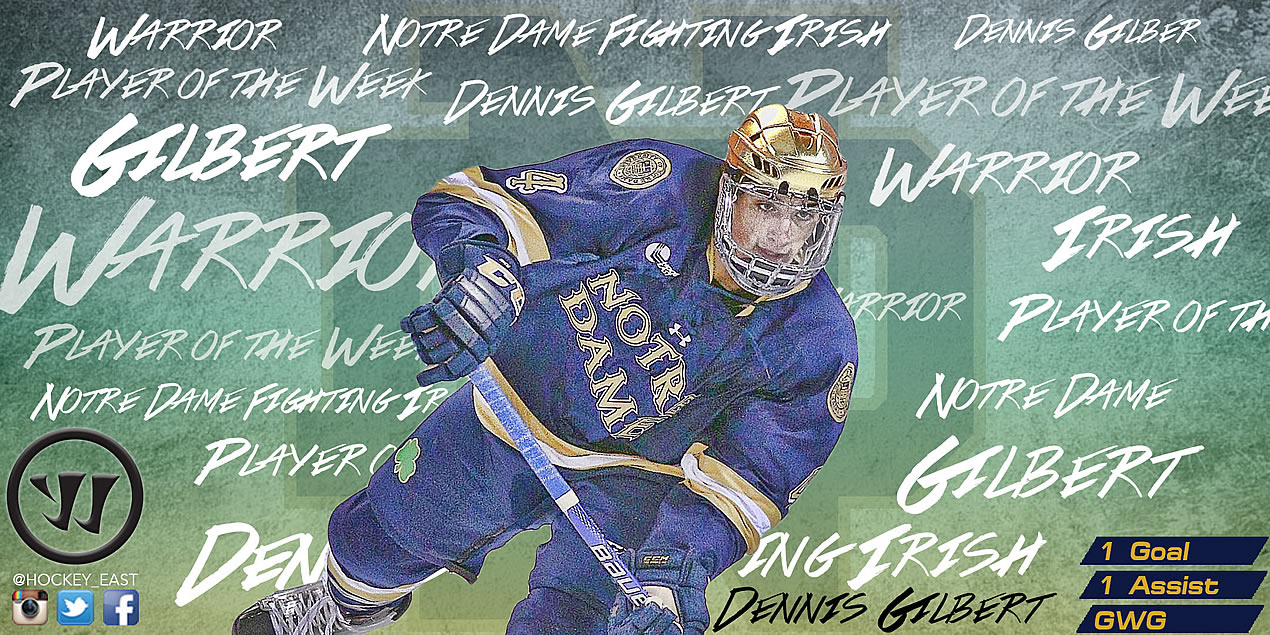 Gilbert helped the Irish complete a dramatic come-from-behind win at No. 3 Boston College Thursday night. He dished out an assist before scoring the game-winning goal with just 22 seconds remaining in regulation to lift Notre Dame to a 4-3 triumph at Conte Forum. 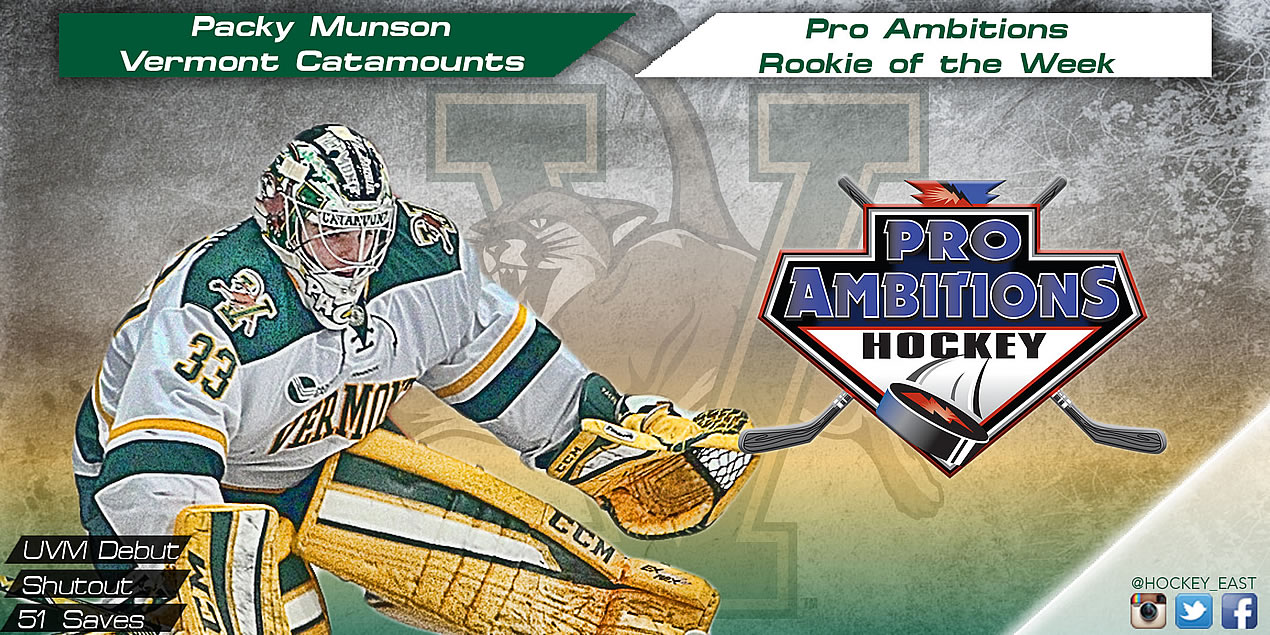 Munson stopped 23 shots and picked up a shutout in his collegiate debut for Vermont. He became the first Catamount since 2004 to pitch a blank sheet in his first game with the squad. He followed up that victory with a 28-save performance on Saturday at St. Lawrence. 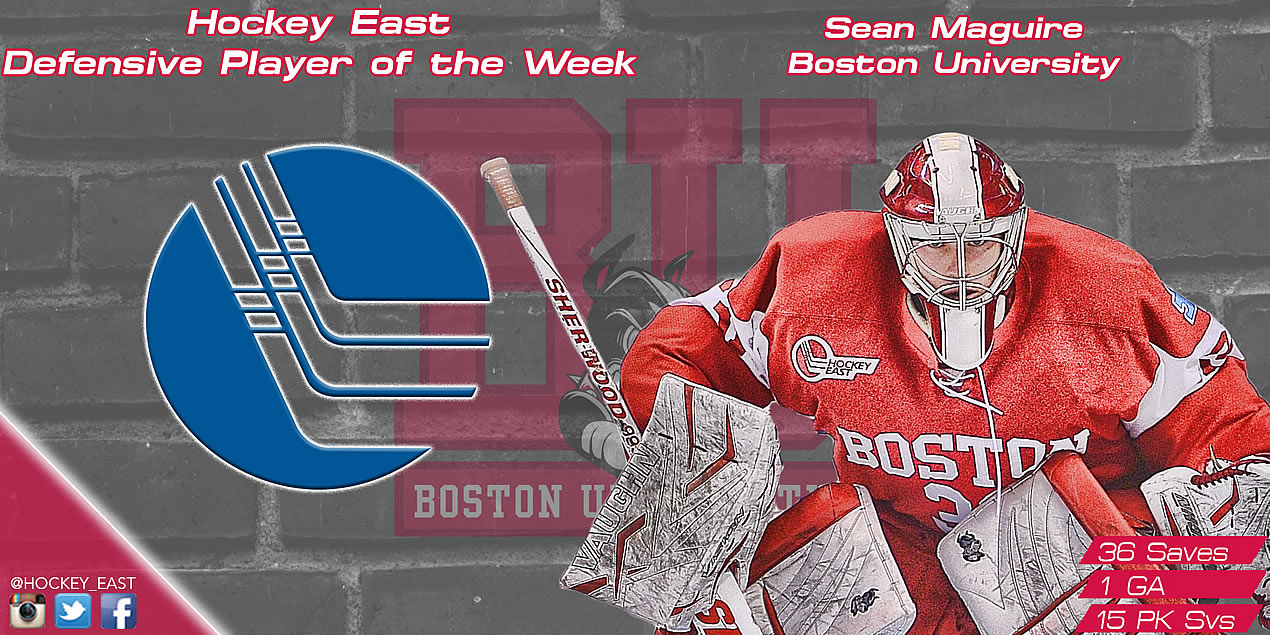 Maguire became the first goaltender to beat No. 2 and previously unbeaten Quinnipiac in 2015-16, stopping a season-high 36 shots against the Bobcats. Maguire faced 15 shots while the Terriers were on the penalty kill and he allowed just one goal in the 4-1 victory for BU.

Bobo Carpenter, BU (Fr., F; North Reading, Mass.) Found the back of the net at No. 15 Yale and No. 2 Quinnipiac as BU split the weekend.

Marc Biega, MC (So., D; Pointe-Claire, Que.) Registered his first goal of the year, converting on the power play in the 3-3 tie with UConn.

Jordan Gross, ND (So., D; Maple Grove, Minn.) Helped spark a dramatic come-from-behind victory for the Irish, scoring a goal and adding an assist on the game-winner with 22 seconds left in a 4-3 win at Conte Forum.

Brian Bowen, UVM (Fr., F; Littleton, Mass.) Picked up the first multi-point game of his career with a goal and an assist in Friday's win over St. Lawrence.