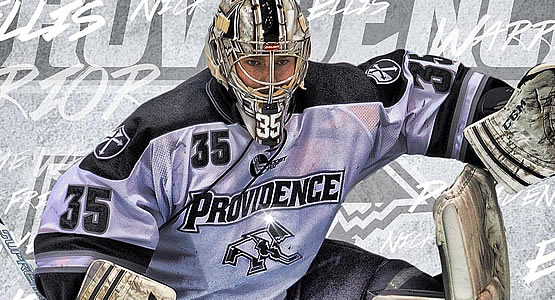 AROUND HOCKEY EAST: No. 1 Providence and No. 11 Boston University skated to a pair of draws in league play this weekend. BU's Ahti Oksanen (Kirkkonummi, Finland) netted the equalizer with just 1:29 on the clock Friday night in a 1-1 tie before the Friars' Jake Walman (Toronto, Ont.) potted two power-play goals at BU Saturday in a 3-3 tie, including the game-tying tally ... UNH's dynamic duo of Tyler Kelleher (Longmeadow, Mass.) and Andrew Poturalski (Williamsville, N.Y.) continued to produce for the Wildcats. Kelleher picked up three points (1g, 2a) while Poturalski had a goal and an assist in the Merrimack draw. The pair sit first and third, respectively, in overall scoring among Hockey East skaters while Kelleher's 13 assists and 18 points lead the NCAA ... No. 2 Boston College won a thriller at Conte Forum Friday night, topping Michigan State, 6-4. Ryan Fitzgerald (North Reading, Mass.) registered a career-best four points (2g, 2a) while Colin White (Hanover, Mass.) has now picked up 12 points in his last five games on four goals and eight helpers and is riding a five-game point streak ... UConn opened the week with a Tuesday night contest against Army West point, falling 2-0 at the XL Center. The Huskies then traveled to Vermont where the lone goal from rookie forward Tage Thompson (Orange, Conn.) was not enough to power past the Catamounts ... Vermont and Kevin Sneddon's squad took three out of four points in Hockey East play this weekend, downing UConn, 2-1, Friday night and skating to a 3-3 draw Sunday afternoon at Gutterson Fieldhouse. Catamount captain Yvan Pattyn (Ste. Anna, Man.) picked up a pair of helpers in Sunday's 3-3 draw with UMass, finishing plus-two in the two games ... Massachusetts completed yet another lategame comeback, led by junior forward Ray Pigozzi (Evanston, Ill.). Pigozzi sparked the Minutemen as they stormed back from a 3-0 deficit Sunday at Vermont. He scored the game-tying goal with 40 seconds remaining and assisted on two other goals in the 3-3 tie ... No. 13/14 Merrimack continued it's strong start to Hockey East play as Hampus Gustafsson (Ljungby, Sweden) registered a team-high four points (1g, 3a) in two league contests while winning 21 of 40 faceoffs on the weekend. He helped the Warriors to capture three of four points in a 4-2 win over UMass and a 3-3 tie with New Hampshire ... No. 5 UMass Lowell was paced by sophomore forward C.J. Smith (Des Moines, Iowa) in a weekend sweep of Maine. Smith netted two goals while senior netminder Kevin Boyle (Manalapan, N.J.) backstopped the River Hawks to the two wins, stopping 66 of 67 shots for a .985 save percentage and registering his third shutout of the year ... Northeastern collected a crucial point in league play at No. 18 Notre Dame Friday night, skating to a 2-2 overtime tie. Husky junior defenseman Matt Benning (St. Albert, Alb.) scored the game-tying power-play goal with 4:01 on the clock to secure the point for his team. 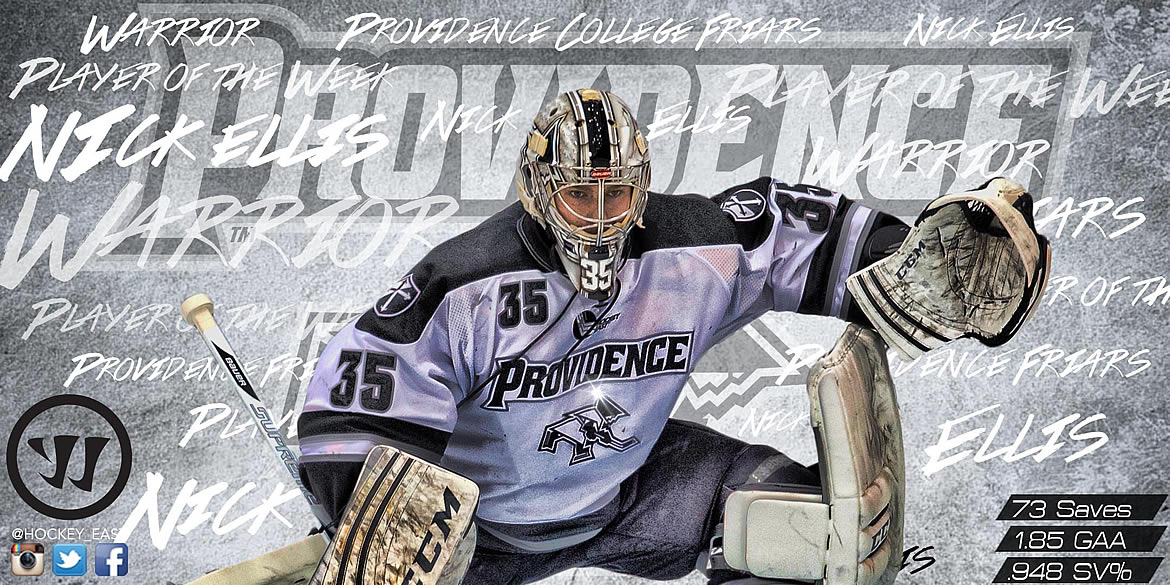 Ellis backstopped the Friars to two draws with No. 11 Boston University over the weekend, stopping 73 of 77 shots to pick up 1.85/.948 numbers. Friday night, he stopped a career high 40 shots against the Terriers to push Providence to a 1-1 tie. His play has helped PC to a nine-game unbeaten streak to start 2015-16, matching the longest such streak in school history. 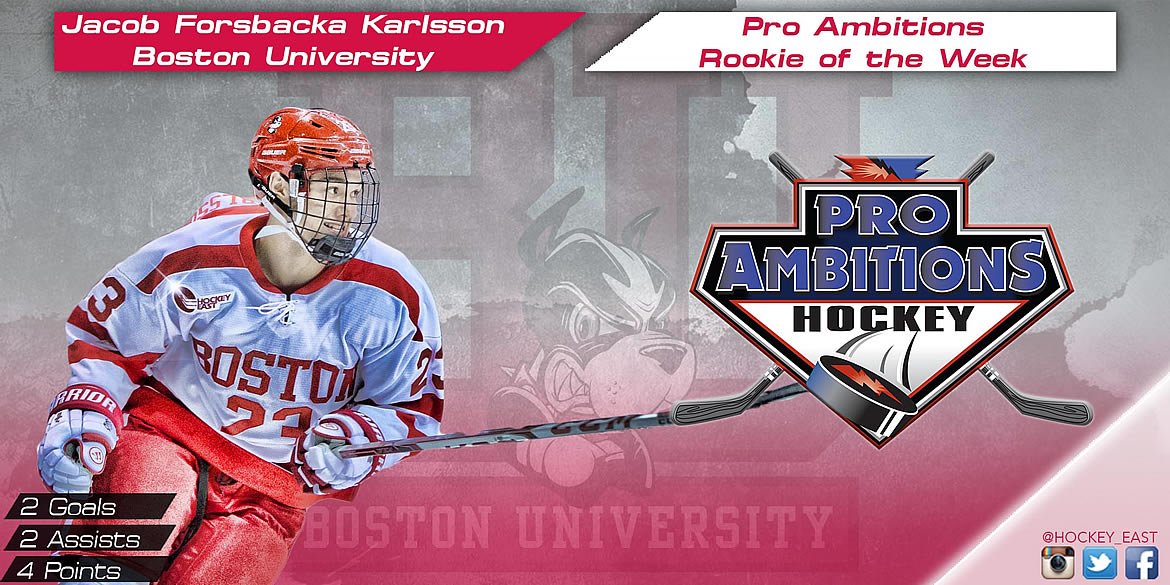 Forsbacka Karlsson had a hand in all four Boston University goals this weekend, helping the Terriers to two draws with top-ranked Providence. He scored a goal and added two assists in the third period of a 3-3 tie Saturday evening after assisting on the lone goal Friday night with just 1:29 left to play in the third period. 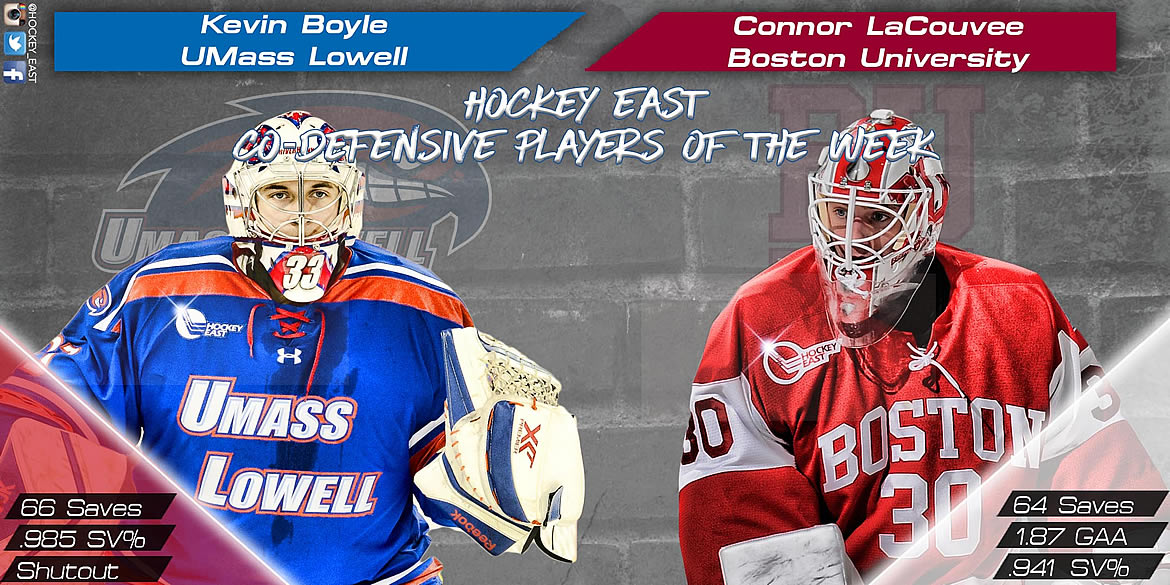 LaCouvee stopped 64 of 68 shots from Providence en route to two draws on the weekend. He has allowed just one even-strength goal in the last 10 periods of play.

Boyle picked up two wins, including his sixth career shutout with the River Hawks Sunday afternoon at Maine, making 66 saves in the two victories.

Colin White, BC (Fr., F; Hanover, Mass.) Has picked up 12 points in his last five games on four goals and eight helpers and is riding a fivegame point streak, including two goals and an assist in the Michigan State win.

Ahti Oksanen, BU (Sr., F; Kirkkonummi, Finland) Scored the game-tying goal at No. 1 Providence with 1:29 left to play, pulling BU to a 1-1 draw before scoring the first BU goal in a 3-3 tie Saturday afternoon.

Ray Pigozzi, UMass (Jr., F; Evanston, Ill.) Led the charge for UMass as the Minutemen stormed back from a 3-0 deficit Sunday at Vermont. He scored the game-tying goal with 40 seconds remaining and assisted on two other goals in the 3-3 tie.

Chris Miller, UNH (Fr., F; Windham, N.H.) Netted the game-tying goal with 38 seconds on the clock to push UNH to a tie at MC Saturday.

Cal Petersen, ND (So., D; Waterloo, Iowa) Kicked out 55 shots in a three-point weekend in league play for Notre Dame, stopping 23 shots Thursday before kicked out 32 in Friday's overtime draw.